Long time, no type. In some aspects it has been a quiet winter (you’ll be able to read about the not-so-quiet part in an upcoming post), so not much to write home about. We haven’t done any real traveling since we arrived in Quartzsite in October.

Recently Kathe had a “free motion quilting” class in Phoenix. I decided that I’d go with her to Phoenix, and find something to do. There have to be some nice trails there on the outskirts that I could wander on.

But it turned out to be a rainy day (yes, Arizona has them). So what to do? Hmmm… I’ll look at the web… Multiple “things to do in Phoenix on a rainy day” lists had the Musical Instrument Museum at, or very near, the top of the list. OK, let’s give it a try. Then I’ll grab some lunch somewhere and see something else in the afternoon.

When I told some of my grandkids that I had gone to the museum, Dean immediately asked, “Did you see the Octobass?”

The apparent size is accurate, not an artifact of perspective caused by having the instrument in the very close foreground. Note the platform to the left for the musician to stand on, and the fact that the top of the octobass is only an inch or two from the ceiling.

Dean had obviously read about the museum!

Spoiler alert: I never did go anywhere else. I hadn’t seen everything by the time I had to go pick up Kathe at 4:00. Phew! (And the lunch in the museum cafe was surprisingly good!)

The museum is organized in a few different ways; one is by geography. There are rooms dedicated to the instruments from these areas: Africa and Middle East, Asia and Oceania, Europe, Latin America, and America and Canada. Within each room, the instruments from different cultures and regions are grouped for display.

Each display in the museum has a video screen showing related music making. Everyone gets a wearable receiver / headset that picks up the audio for the screen if you are within about five feet. This made it much more interesting than if there were simply static displays. Several of the pictures below show these video screens.

Here are a few examples of the regional displays.

Some of the displays contained traditional dress and ceremonial costumes.

Something that hit me quite strongly was the similarity of instrument designs used around the world, and the diversity of the music they produce when used in different cultures.

It seems that almost all the string instruments fall into the categories of “zither” and “lute,” which are then modified by how the string is caused to vibrate, for example, “strummed,” “plucked,” or “struck.” You’ll see some examples below.

Guitars are one of the most widespread instruments; they are manufactured on every continent except Antarctica. Now there is an opportunity for the over-winterers! Be the first!

Here are a (very) few of the guitars in the guitar room. Click on an image to see a bigger version with some brief descriptive text. 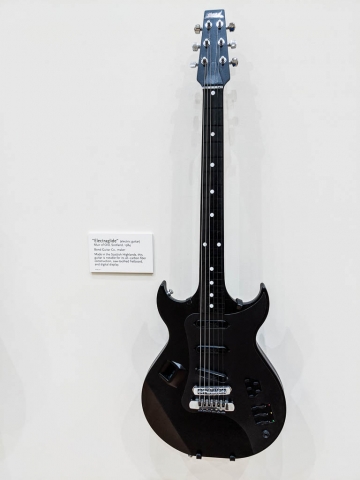 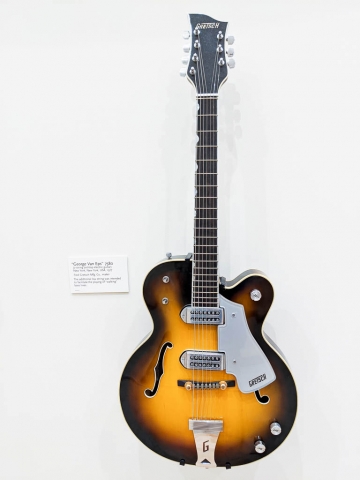 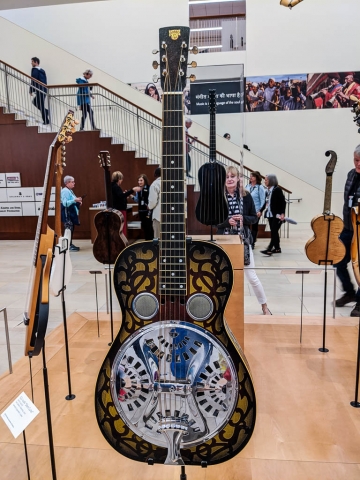 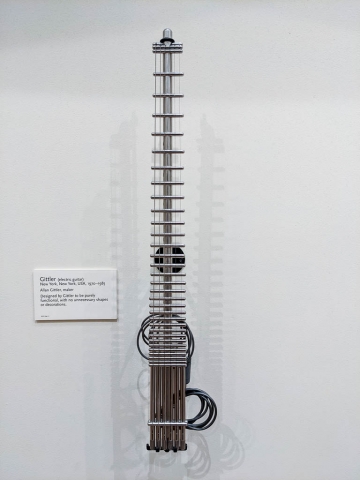 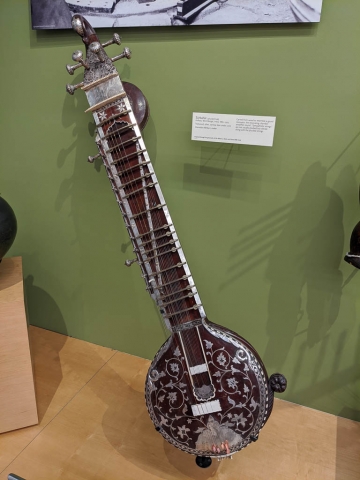 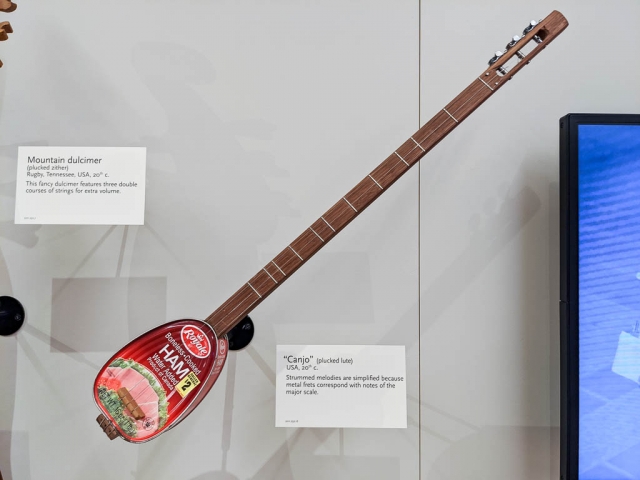 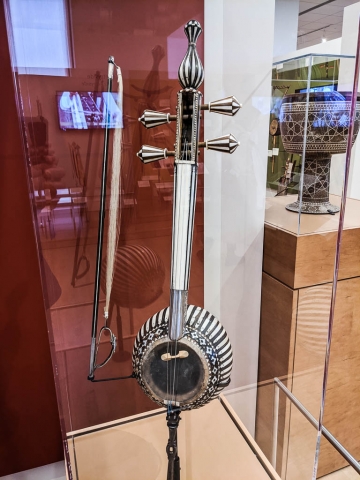 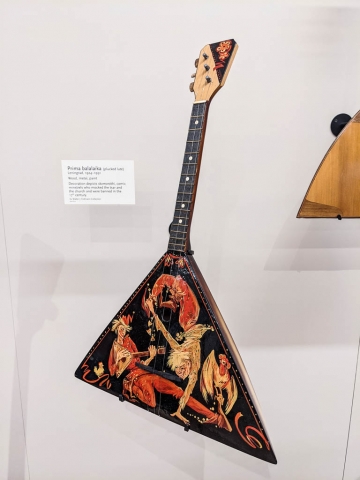 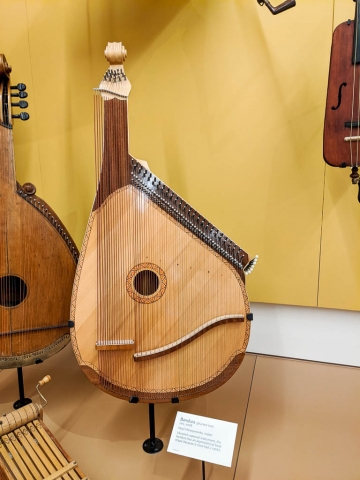 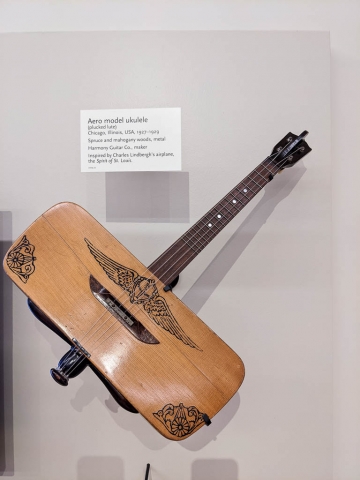 Many cultures have what we would call a hammer dulcimer; the museum uses the more generic name “struck zither.” Here are a few examples from around the world. Again, click on a picture to see the instrument’s name and country of origin. 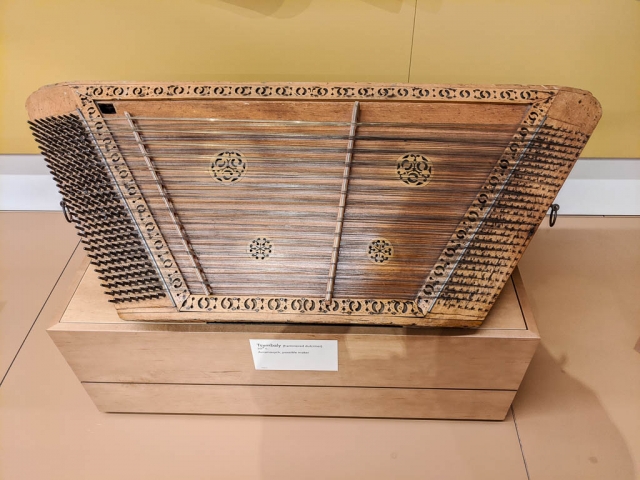 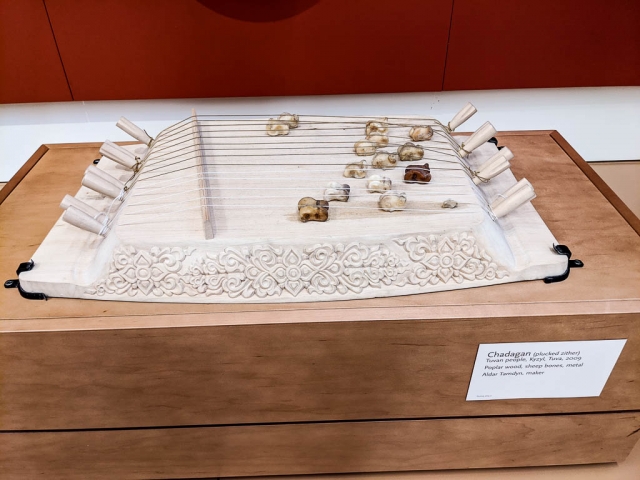 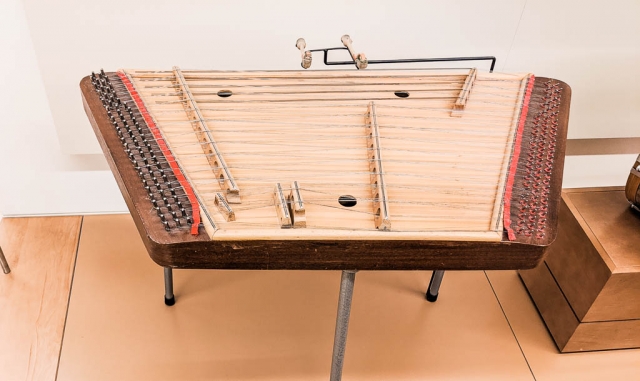 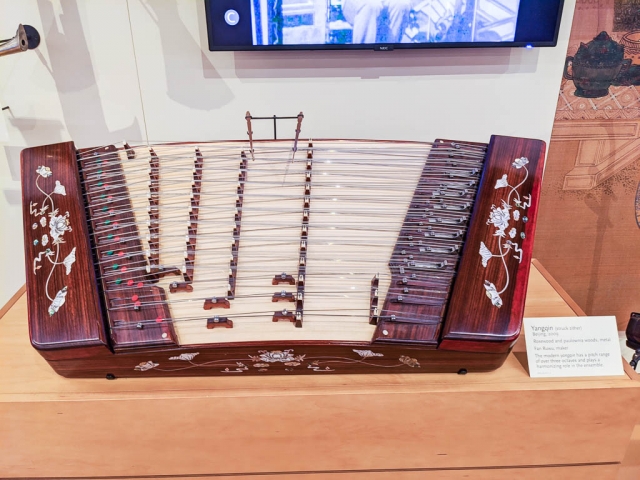 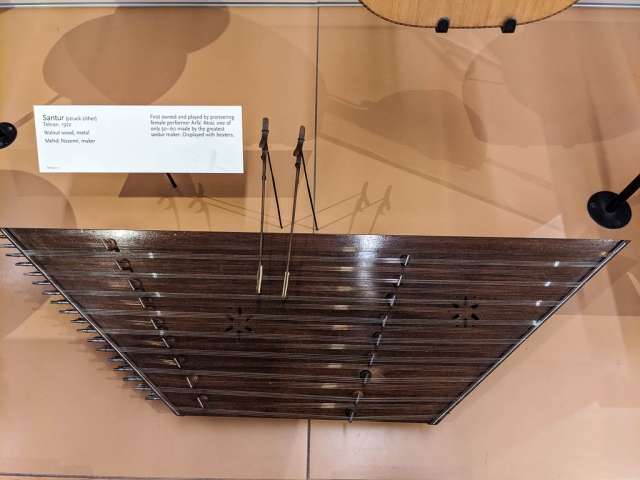 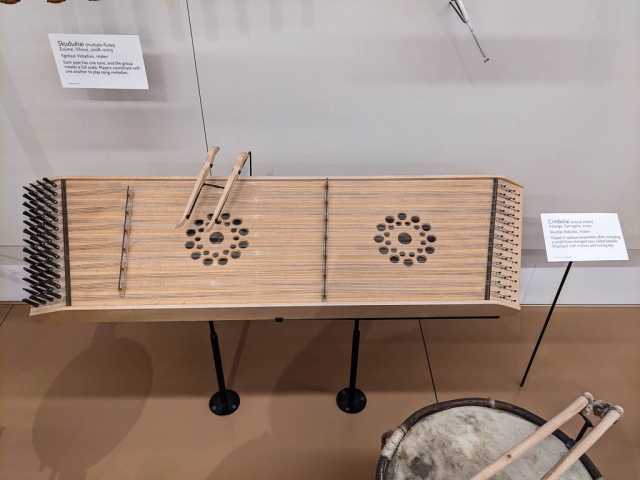 Other zithers were on display as well, both strummed and plucked. This family includes harps, and autoharps. Here are a few of the many on display.

The mechanical instruments room doesn’t include record players, tape recorders (am I dating myself?), or other similar machines. That is probably because they are music reproduction machines, not music creating machines. But there is certainly a wide range of the latter represented!

One of the interesting things about the combination piano and violin (above) is that it uses electric instead of pneumatic controls.

Despite the card calling this a “mouth organ” in the title, the fine print in the description calls it a “player trumpet.” Who knew?

Boy, that music box looks just like the one I had as a kid!

One item in the mechanical room that I couldn’t get a picture of (too big) was a “portable” many-instrument item. It was about 15 feet tall and 30 feet wide. It was designed to be moved, but had to be disassembled to do so.

Every RVer knows that Elkhart is the world capital of RVs, with more manufactured there than anywhere else by a large margin.

I was very surprised to learn that it also claims the title of the world capital of band instruments, manufactured by the Conn company and other Elkhart-based companies, many of which were started by former Conn employees.

For various reasons, a few of the instruments I saw were special to me.

Back in the early ’60’s, my brother and our father built a Theremin from plans in Popular Electronics magazine. You may not know the name, but you have almost certainly heard a Theremin or derivative instrument. Think of the eerie varying pitched tones in grade B sci-fi movies. I never knew it was a legitimate instrument, used in concerts by Clara Rockwood. Here is one actually built by Lev Sergeyevich Teremin (a.k.a. Léon Theremin), and given to Clara.

The loop on the left and the stick on the right are antennas. One controls pitch, the other, volume. You control the instrument by moving your hands closer to or farther away from the antennas, without ever touching them.

Nashua First Church bell choir, you need these! This G1 is the lowest-pitched handbell currently in production. Using aluminum instead of brass for the larger bells cuts the weight by half.

This next one caught my attention because of the WHY??? factor. It is an electric steel guitar with FOUR fingerboards… OK, you musicians out there. WHY? Is there a human 2.0 option for a few extra pairs of arms?

And finally, one that had me close to tears. Children in Paraguay scavenge refuse dumps, to make instruments from the waste they find. Here a viola (bowed lute) from an old paint can, using a discarded fork for the tailpiece. The urge to create music is strong!