Al: I never served in the military; I know that I don’t have a soldier’s “headset,” for lack of a better word. I have high respect and admiration for those who have.

I considered not writing about Gettysburg.  The scope is too large.  Being on the battleground is completely overwhelming; I don’t know really where to begin.

One way could be to look at the sobering statistics. In three days of fighting, July 1 – 3, 1863, approximately 7000 soldiers were killed. There were approximately 51,000 casualties (soldiers killed, wounded, captured, or missing). There are many estimates of the casualty count; we have seen higher and lower estimates. Some units lost two thirds or more of the men who were present at the start of the battle. 158,000 were engaged in the battle across the three days.

Amazingly for a battle that surrounded a city, there was only one civilian casualty; a twenty-year-old  woman named Jenny Wade was killed by a stray shot.  How times have changed.

The civilian structures were damaged, though, and some still bear the scars.

Occasionally we’ll include a reference, “(NPS)”. This indicates that a particular statistic or comment came from the National Park Service’s Gettysburg FAQ web page.

Kathe: I’ve been to Gettysburg in recent years but Al had never been; I couldn’t wait to share it with him.

When we entered the visitors’ center, we headed right for the ticket booth and decided to purchase the three-way pass that comprises the Cyclorama, the museum, and a two-hour bus tour of the battlefields. As we always do with every National Park we visit, we started with the orientation film. It gave an overview of the three days in July 1863 — narrated by Morgan Freeman — and I was already in tears.

From the overview film, we were shepherded upstairs to the Cyclorama. It’s breathtaking – a 360-degree painting of the Gettysburg Battlefield that was painted in 1883 (it’s one of four that have been created – this one was acquired and restored a few decades ago). It is 42 feet tall and 377 feet around. We all stood on a raised platform in the middle of the room and were surrounded by images, lights, sounds, and narration that made it all come to life. We were in the midst of the battle. It was sobering. More tears.

Us: Later while on the battlefield, one of the things that surprised us was the terrain. This is open, mostly flat, land.  In 1863 it was even more open; many of the trees now present were not there.  Then it was agricultural fields. The National Park Service has an ongoing program to restore the area to the conditions at the time of the battle, removing trees, planting orchards, and restoring walls and fencing. Local farmers have access to the land to plant crops.

According to our tour guide, the tactics had not changed much from the days of the Revolutionary War, with the soldiers often marching in a line across an open field toward the opposing side.  A rise of only 100 feet (sometimes less) could give a dominant position.

The key high point was Little Round Top, at 150 feet above the fields.  The higher rise next to it, Big Round Top, was not useful militarily because it was (and remains) completely wooded.

Shortly after the war, various groups began placing bronze and stone (mostly granite and marble) monuments on the battlefield honoring regiments, divisions, corps, and armies.  Now there are approximately 1328 (NPS) monuments within the park. They range in size from gargantuan (Pennsylvania and New York) to diminutive and hidden in the woods (Maine 20th). The brigade monuments had either round (Confederate) or square bases (Union). 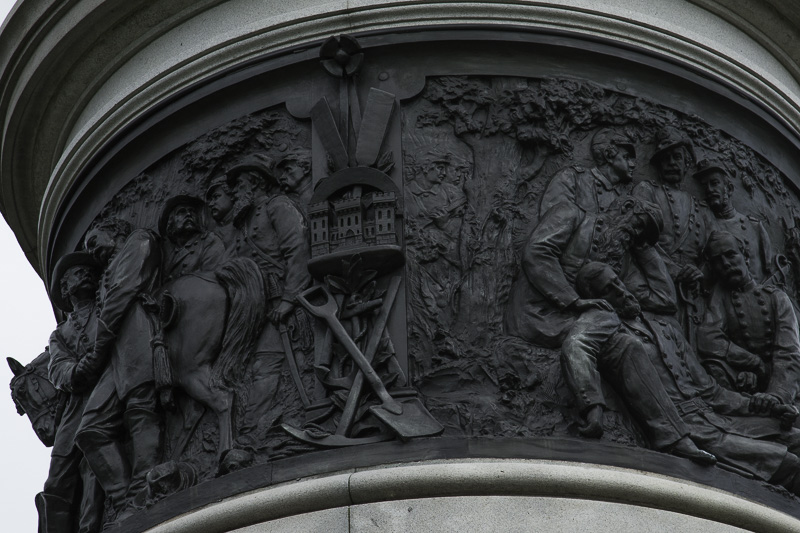 Detail of the New York monument

There were also many markers across the battlefield that indicated the midpoint of each regiment and their right and left flanks (ends). You can see how closely the units were deployed.

We walked the range that the Maine 20th Regiment had spread across on Little Round Top; it was amazingly short. Due to where they were deployed, their monument is a short walk into the woods. The inscriptions on the sides of the monument list the soldiers who were killed or died of their wounds inflicted during the defense of Little Round Top. 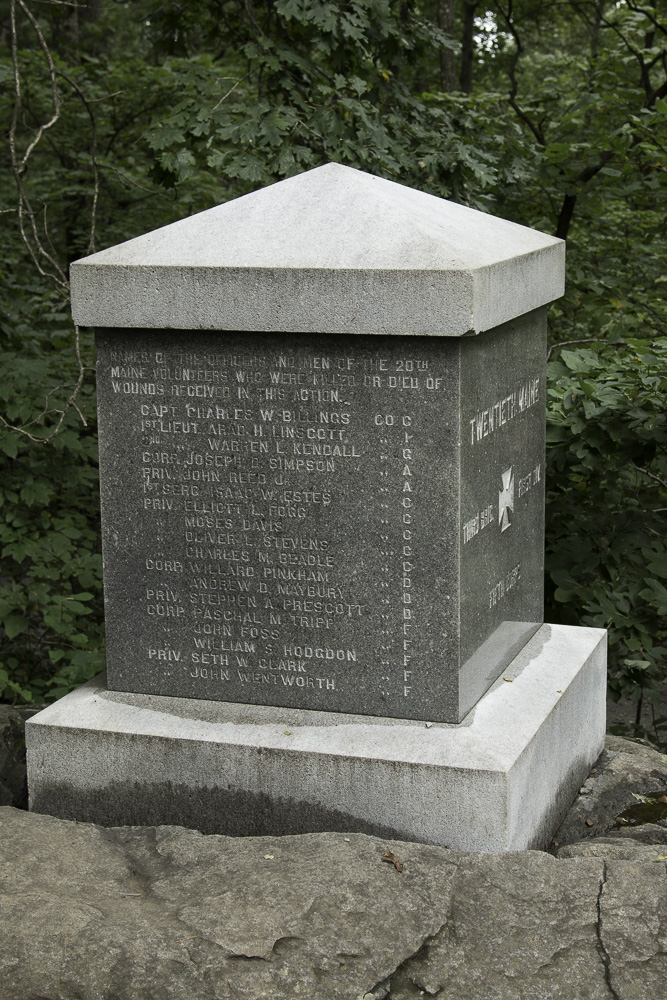 We took advantage of a free Ranger Program in the park on our last morning there: a tour of the National Soldiers’ Cemetery on Cemetery Hill. This area was known as Cemetery Hill at the time of the battle and was one of the contested regions.  The Soldiers’ Cemetery is adjacent to a pre-existing public cemetery which gave the hill its name.

Soldiers were originally buried in shallow graves on the battlefield. They were then re-interred with great effort at the Soldiers’ Cemetery.

Originally set aside by the state of Pennsylvania, it was for the Union dead only.  Most of the Confederate dead were interred in the Hollywood Cemetery in Richmond, VA, in a special section set aside for Gettysburg casualties (NPS).  Now it is a national cemetery and is still in active use.

Each state had a marker indicating the number of soldiers buried here.

Additionally, there are many simple numbered marble markers for soldiers for whom their state was unable to be determined.

All of the soldiers are arranged in a semicircle around the Soldiers Monument that is the focus of the cemetery.  The way they are buried seemed unusual; they are buried behind their headstone with their heads toward the center.  In this way should they rise they will be facing outward, ready to defend Cemetery Hill again.

The cemetery is still in use; here are some graves from the Spanish-American War, and World Wars I and II.  Still newer graves are in an adjacent annex.

Being on the battlefields of Gettysburg gave us a deeper understanding and reverence for the words of Lincoln’s Gettysburg Address. It is an awe-inspiring and humbling place that we hope each of you will have an opportunity to experience.

Four score and seven years ago our fathers brought forth on this continent, a new nation, conceived in Liberty, and dedicated to the proposition that all men are created equal.

Now we are engaged in a great civil war, testing whether that nation, or any nation so conceived and so dedicated, can long endure. We are met on a great battle field of that war. We have come to dedicate a portion of that field, as a final resting place for those who here gave their lives that that nation might live. It is altogether fitting and proper that we should do this.

But, in a larger sense, we can not dedicate—we can not consecrate—we can not hallow—this ground. The brave men, living and dead, who struggled here, have consecrated it, far above our poor power to add or detract. The world will little note, nor long remember what we say here, but it can never forget what they did here. It is for us the living, rather, to be dedicated here to the unfinished work which they who fought here have thus far so nobly advanced. It is rather for us to be here dedicated to the great task remaining before us—that from these honored dead we take increased devotion to that cause for which they gave the last full measure of devotion—that we here highly resolve that these dead shall not have died in vain—that this nation, under God, shall have a new birth of freedom—and that government of the people, by the people, for the people, shall not perish from the earth.

Delivered at the Soldiers’ Cemetery in Gettysburg, Pennsylvania