I admit it. I’ve been thinking about this post for several weeks and needed time to let it percolate.

Truthfully, I’ve been procrastinating. I’m not sure I can do this experience the justice it deserves but I’ll try.

While exploring what to see in Memphis, we learned that it is the home of the National Civil Rights Museum. The museum is actually on the site of the the Lorraine Motel, where Martin Luther King, Jr. was assassinated. This destination jumped to the top of our list for our Memphis stay.

We had no idea. 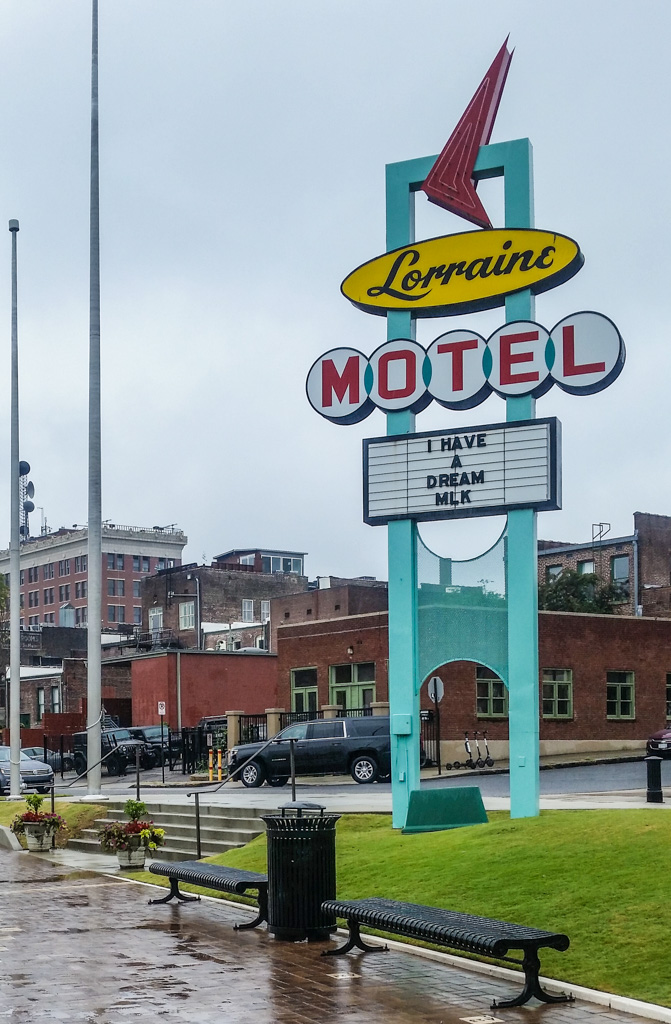 The NCRM has two large buildings— the Lorraine Building  (the motel) and the Legacy Building across the street, which was the boarding house from where the assassin James Early Ray took aim.  The path of the bullet is depicted in the pavement that runs between the two buildings.

From the moment we stepped inside the museum, it was very clear that it had been designed with incredible precision and purpose.

The museum was incredibly text rich—it took us several hours to read our way through the museum and I’m sure we didn’t read all that was posted.  (It did make me wonder how someone who isn’t able to read English well would experience the museum.)

The expanse of coverage was overwhelming both in size and scope—the museum’s floor-to-high-ceiling exhibits span the Civil Rights Movement in the United States beginning in the 1700s  with resistance to slavery and continuing into the current day with worldwide events that not only conjure inequality but also call us to work for equality—for all. 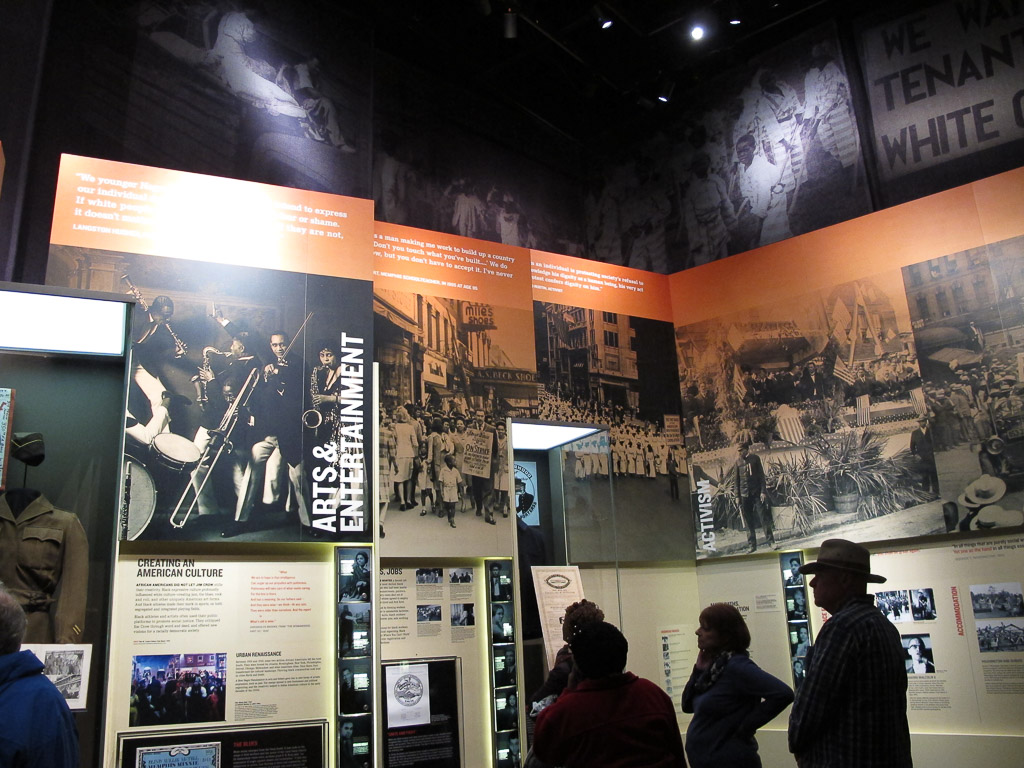 We were overwhelmed by the impact the exhibits had on us.  I felt a combination of breathlessness, anxiety, regret, and anger.  There was so much to take in. So much to learn.

The powerful introductory movie concluded with shadows of people marching across the screen. As the theater was dimly relighted, we were asked to exit by climbing a few stairs onto the stage and exiting behind the screen.  We became part of the march. Chills.

It was difficult to witness some of the bone-chilling exhibits.  In a large room focused on slavery, an alcove depicted the innards of a slave ship where life-sized bronze statues wrapped in chains were crowded together on the floor.  Their agonizing screams and groans played on a continuous loop.  It felt disrespectful to even consider taking a photograph. We were there to learn. And we were humbled.

As we tried to take it all in, the displays continued to draw us into each scene as if we were present.  The story of school desegregation was displayed in a courtroom and a classroom.  Martin Luther King Jr.’s experience in the Birmingham Jail was told in a jail cell. 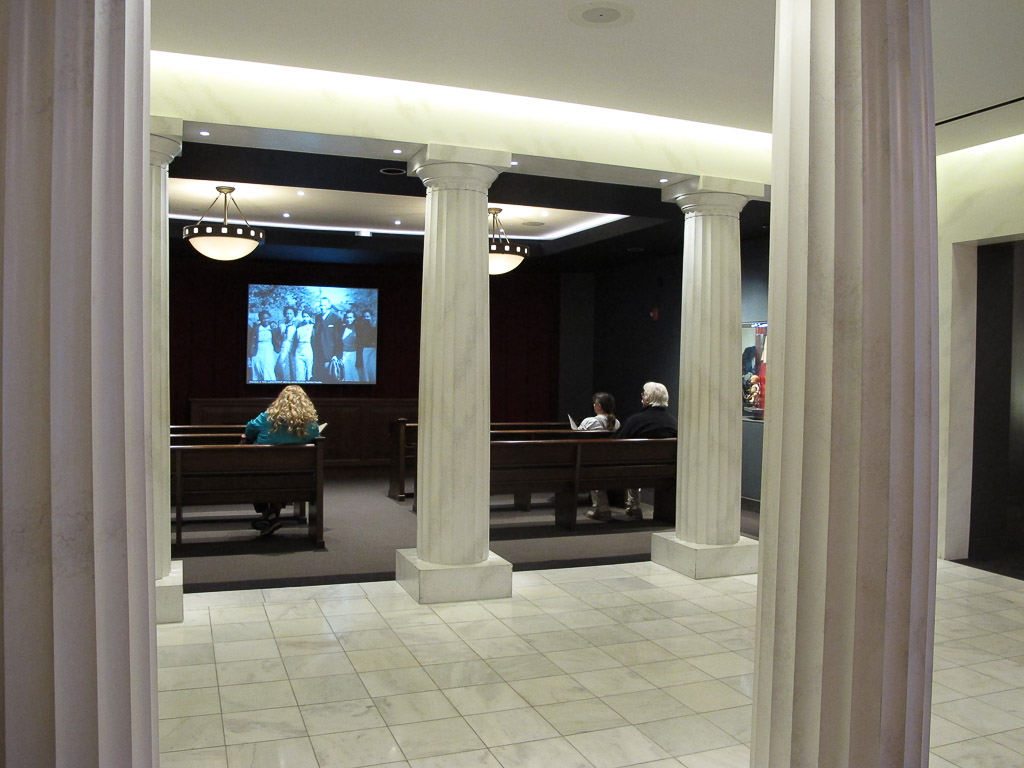 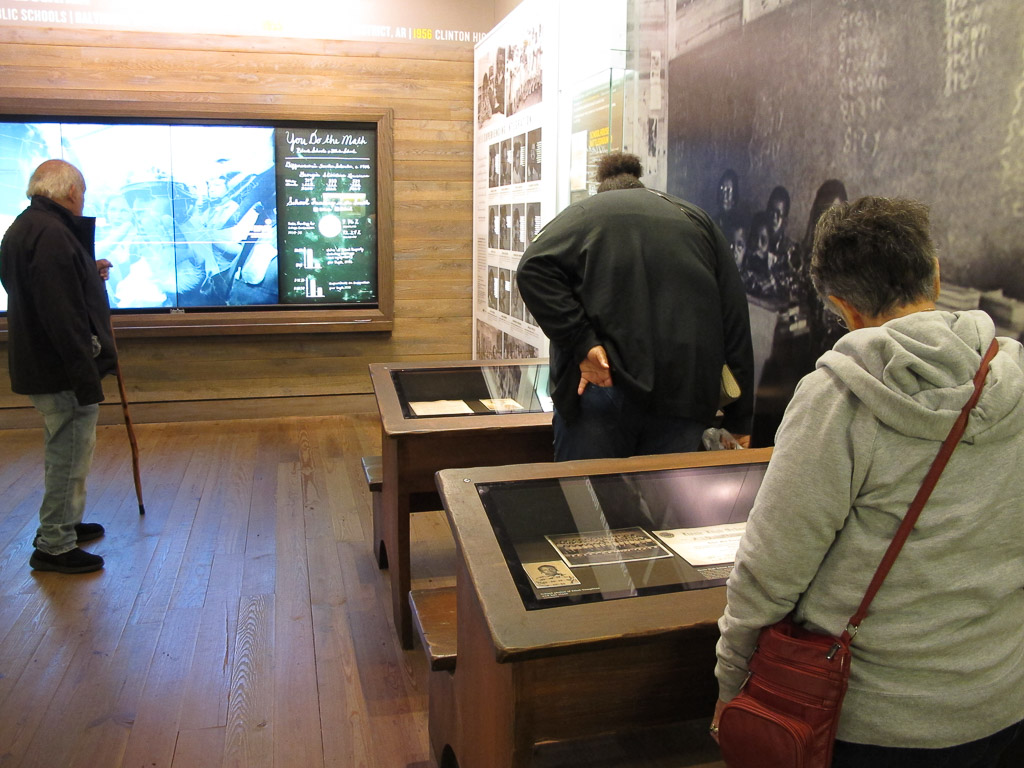 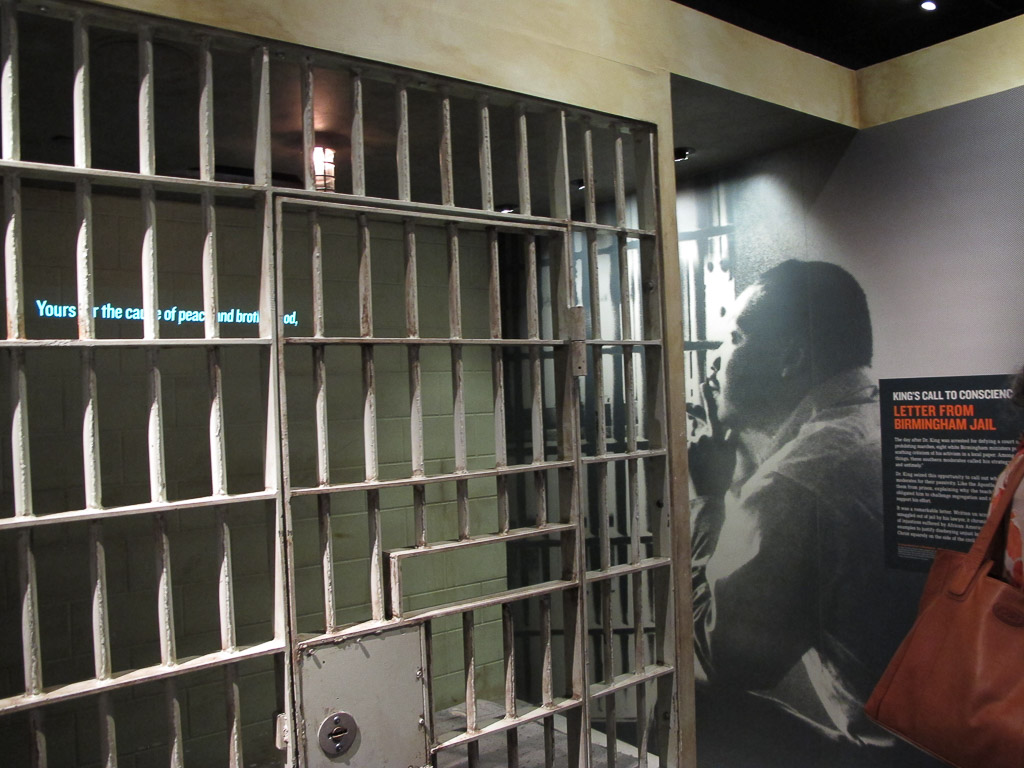 We agreed that our own public education had been tremendously lacking in U.S. history past the Civil War.  The school curriculum in Stamford, CT in the 1960’s did not include anything past the beginning of the Reconstruction era. Current events were glossed over and never put into an historical context.

I felt ashamed as I realized how little I knew.  We should all know this history.  Why weren’t we taught this?

I won’t presume to be the one to teach others this history that is so new to me; hopefully you already know much of it yourself.

The Rise of Jim Crow began in the late 1800’s and continued well into the 20th century.  The 15th amendment and legislation were passed to guarantee rights to African Americans and were then destroyed by a series of new laws and Supreme Court decisions that made “Separate but Equal” the law of the land. Segregated schools. Separate water fountains. Separate. Separate. But never Equal. 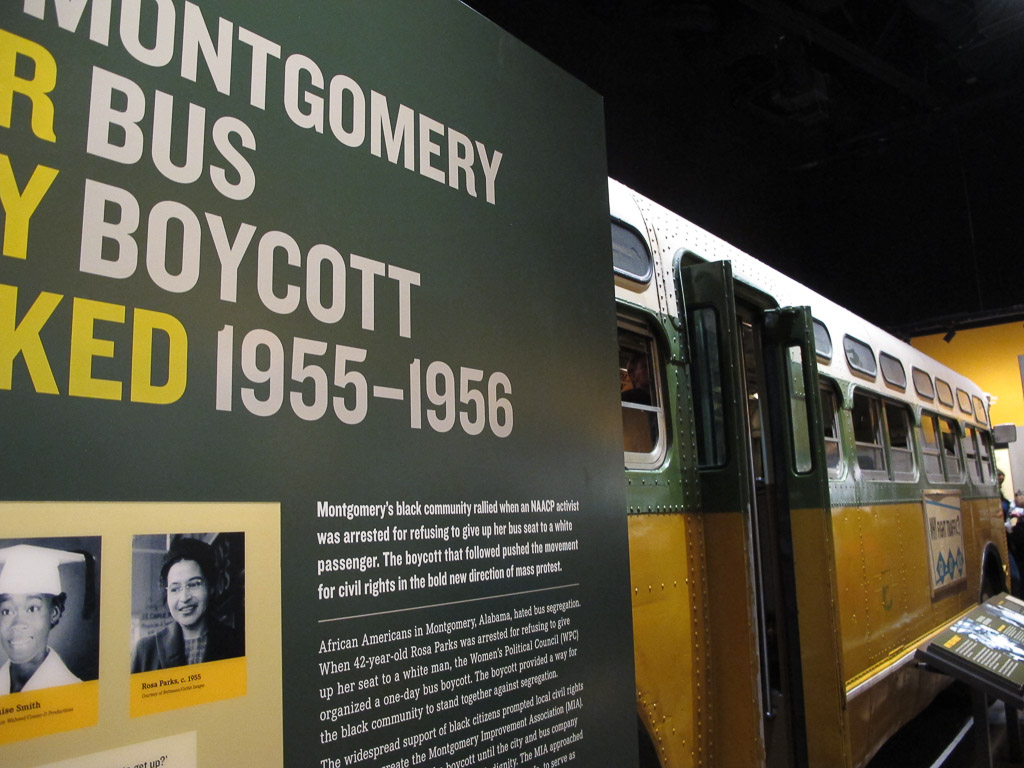 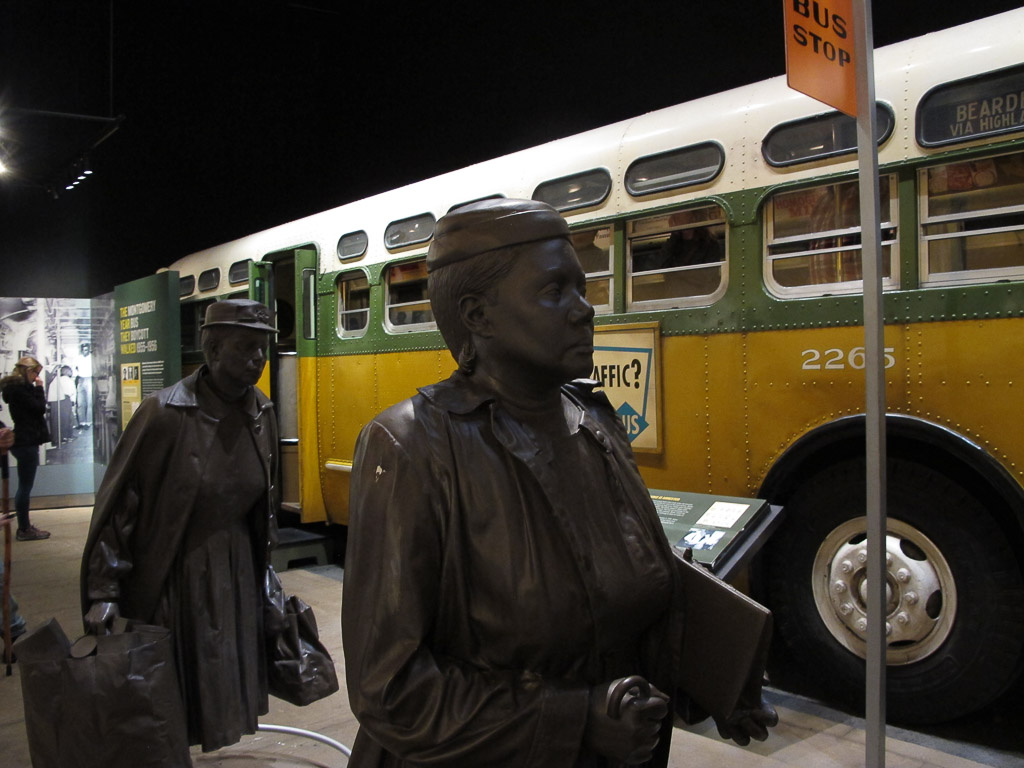 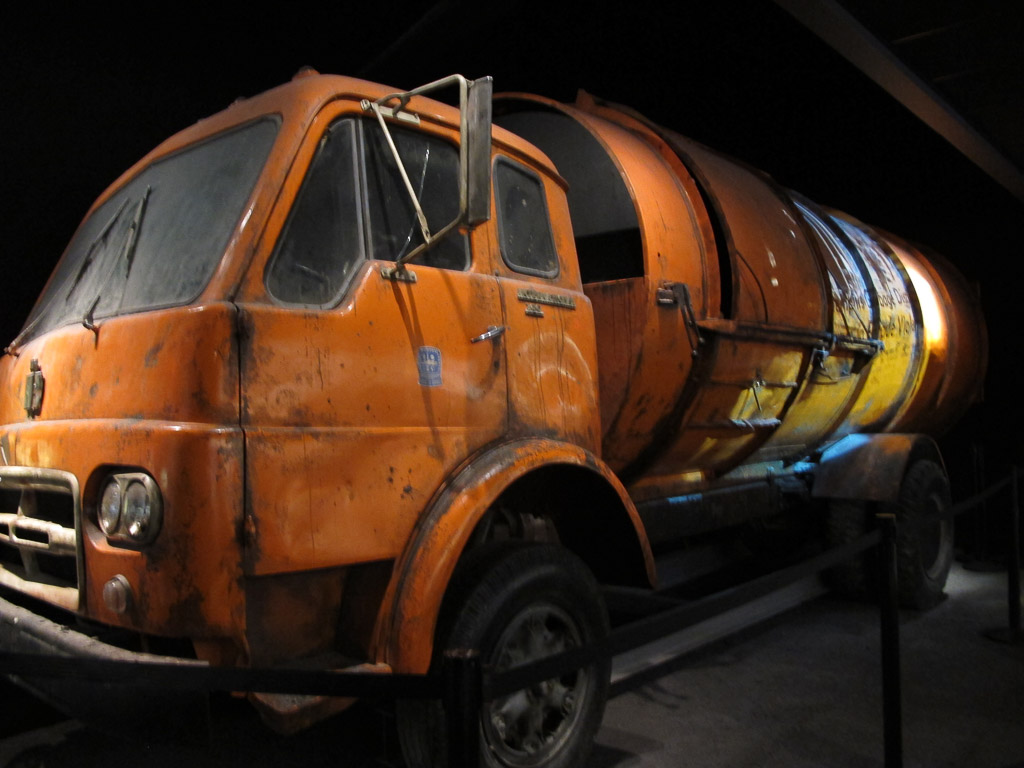 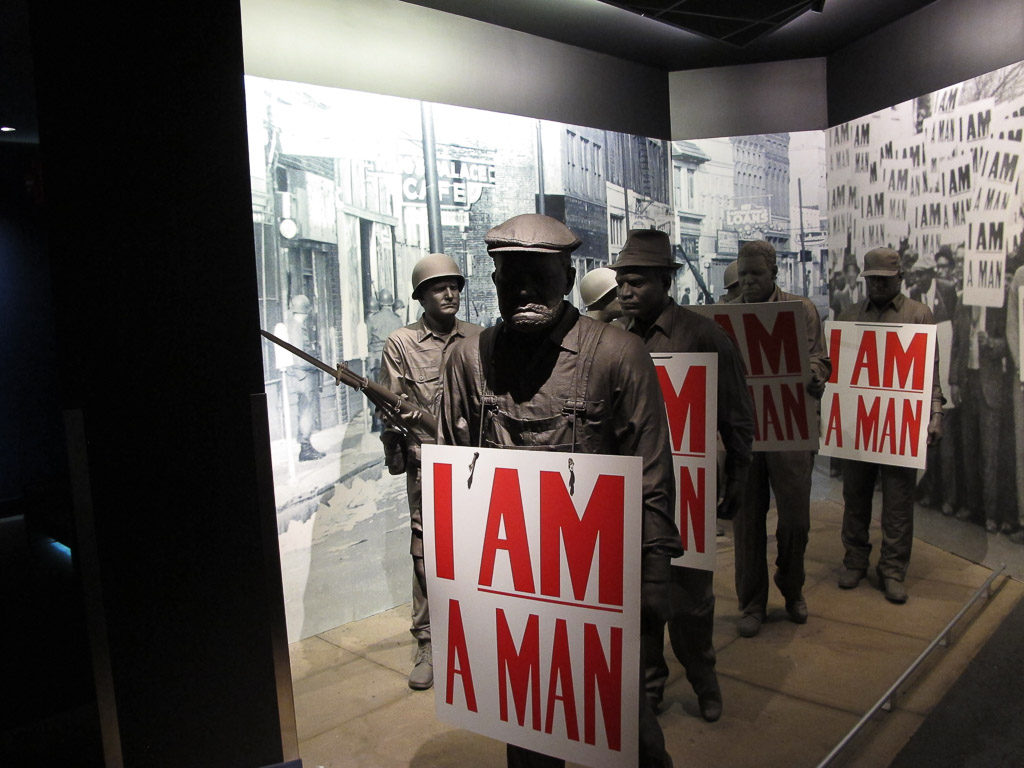 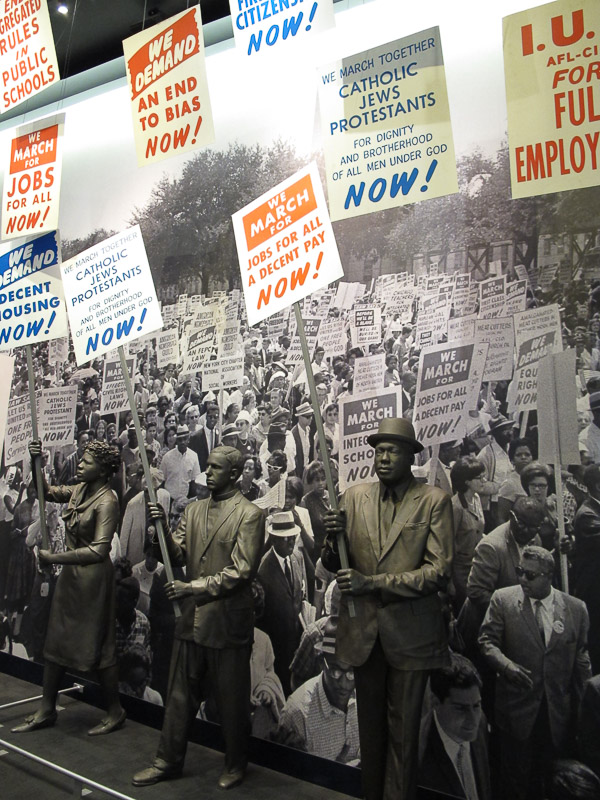 In the afternoon we visited the three-story Legacy Building across the street.  On the 3rd floor, a timeline tells the story of the American Civil Right Movement up to the time of MLK’s assassination.  The entire second floor is dedicated to the investigation of the crime:  the conspiracy theories,  extensive evidence ,  and the actual spot where James Earl Ray took aim.

I felt unsettled. Is this where the museum leaves us? I was glad when the tour ended on the first floor.  Here we learned more about how the Civil Rights Movement here in the US has impacted human rights and civil rights throughout the world. We were left with the voices of many who have been called into action and who are making huge impacts globally to work toward equality for all.  In the dimly lit room, a mural of silhouetted men, women, and children led us out; again, we became part of the story.

6 thoughts on “A Difficult, Humbling Day”