We’ve been living here on the desert for over three months. The time has gone by so quickly. We are now starting to plan our spring and summer travel; it is almost time to leave.

We’ve come to love it here on the desert. At our own choosing, we can be quiet or busy—with friends or on our own.  And, with apologies to all our family and friends still in the colder climes, the weather hasn’t been too bad, either!

Last week, we went with some friends to Palm Canyon, in the Kofa National Wildlife Refuge. According to this, it is the last place in Arizona that California palm trees grow in their native environment. A nice one-mile in-and-out walk, it was our first time up actually near the mountains that surround us.

A comment I had read on the net said that the viewing point was a half mile up the trail, but that the palms themselves could be reached in an additional third of a mile “up a fairly steep trail.”

The desert is greening up. We’ve apparently had an unusually large amount of rain this winter. A person we met on the trail said that in a normal year, this scenery would be brown.

And we’re starting to see some flowers blooming. We hope to see more of the “desert bloom” when we go to Joshua Tree National Park in California for a few days this week.

So what else have we been doing these “desert days?” Some of it we’ve written about before, like Kathe’s quilting, the rock and gem shows, and our trip to visit Mike’s family over Christmas.

We had been warned that for a few weeks in January Quartzsite is an overcrowded madhouse with long lines, terrible traffic in town and so on due to multiple rock and gem shows, and a big RV show. Additionally, the population on the LTVA (BLM’s Long Term Visitors Area), where we are living, swells. We wanted to avoid all that humanity if we could.

Fortunately in addition to the LTVA, the BLM has six “fourteen day” camping locations in the Quartzsite area. These sites have no services whatsoever, but are free to camp in for 14 days. After that you have to leave for at least fourteen days. If you want to continue to use free BLM land in that time period, you must move at least 25 miles away.

We were fortunate that we had two back-to-back events at a fourteen day area three miles farther out of town than we normally reside: a (yes, another) Grand Design RV owners’ rally, and a ham radio gathering, “Quartzfest.” These allowed us to avoid the worst of the Q-crush. Just to experience the big RV show in town we did ride our bikes there one afternoon; no way we were going to try to drive in and find a parking space. For all the hype surrounding the “big tent” show, we were unimpressed.

We had fun helping with the Quartzsite Quilt Show put on by the local quilting group Kathe is part of! I helped set up (and tear down) the exhibit space, and Kathe was busy before, during, and after the show. The quilts were quite impressive.

We spent a week in the Yuma area, staying at BLM’s Imperial Dam LTVA in California with “blast from the past” friends, Henk and Mary.

Arizona didn’t become a state until 1912; Yuma had Arizona’s first prison, in use from 1876 to 1909. A portion of the prison, now called the “Territorial Prison,” is preserved as a state park (part was long ago demolished to make way for a railroad line). There is a museum with many displays about prison life. One showed interesting information about the prisoner demographics; some that stuck out to me were that most of the prisoners were considered to be literate, and virtually all used tobacco of one form or another.

The territorial prison had enlightened leadership. From one of the museum displays:

The Prison had more modern amenities than most homes in Yuma, and Yumans resented that.

Some of the cells are open to enter, and, of course, pretend to lock your friend in!

From Yuma, Kathe went to Corning to play Grandma Lobster, giving Mike and Laurelyn the opportunity to travel during school vacation week. While Kathe was gone, I went to another ham radio gathering in Yuma.

By the time we got back to Quartzsite it was obvious that the exodus had begun. The desert is emptier again; so is the town. People have started heading north preparing the way for us.

One of the advantages of living on the desert is the essentially unrestricted view of the horizon, especially compared to New England. We have been (usually!) waking up before sunrise, and have gotten in the habit of looking for the sunrise, and again for the sunset every day.

Click on any of the pictures below to see them all as a slideshow of larger versions, and remember you can always right click on any picture in our blog and choose “open image in new tab” or similar, to see the largest resolution that we uploaded.. 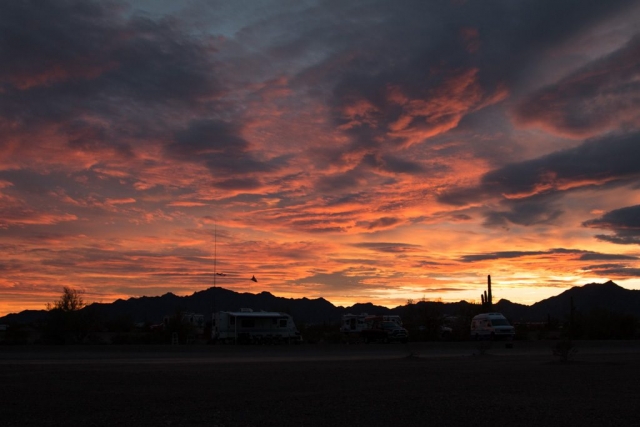 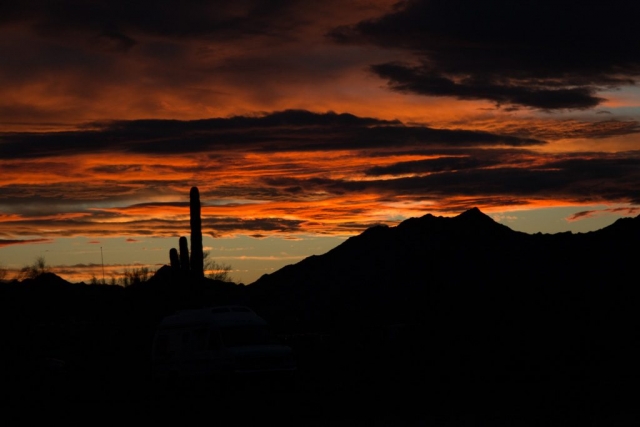 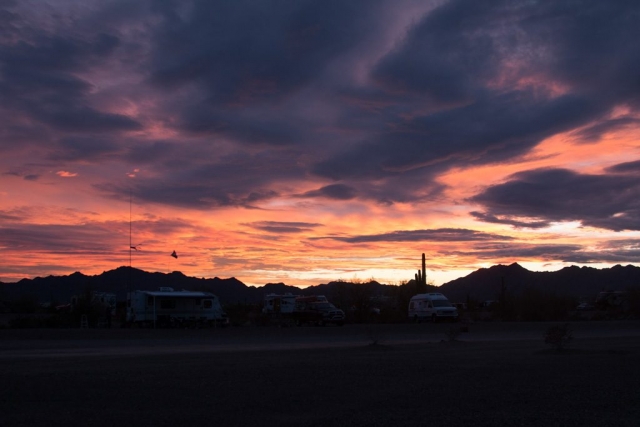 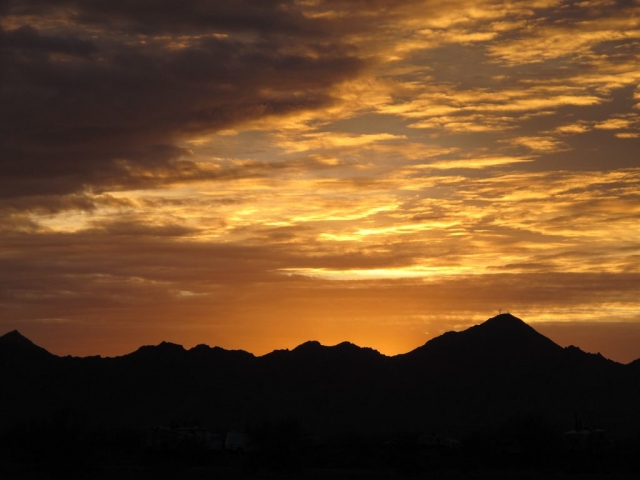 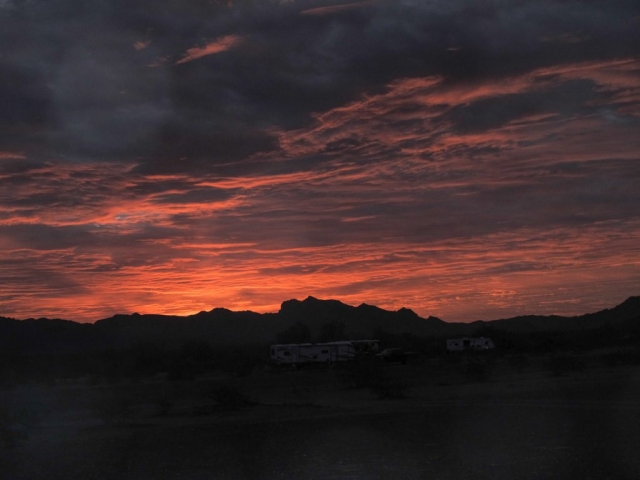 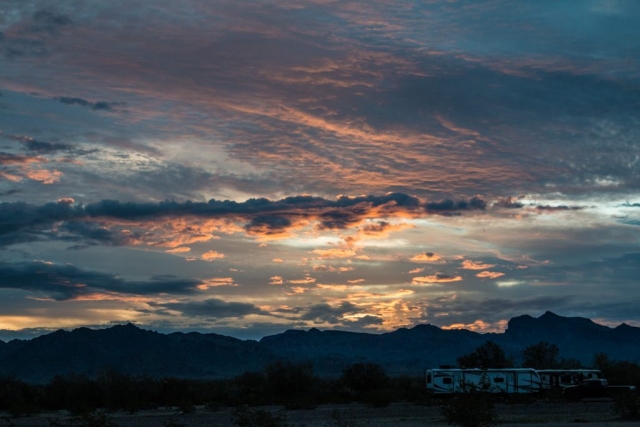 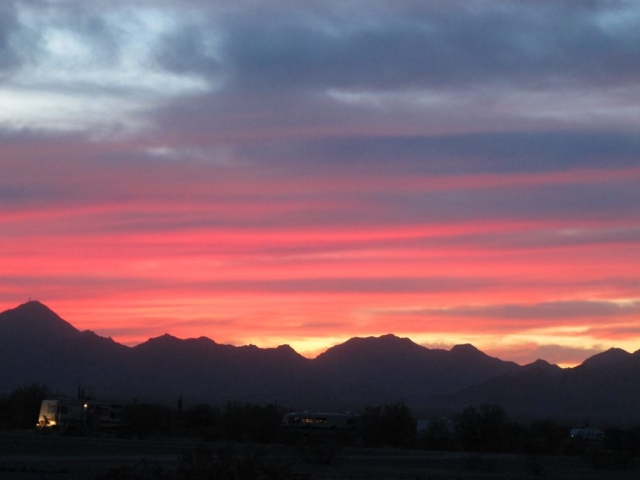 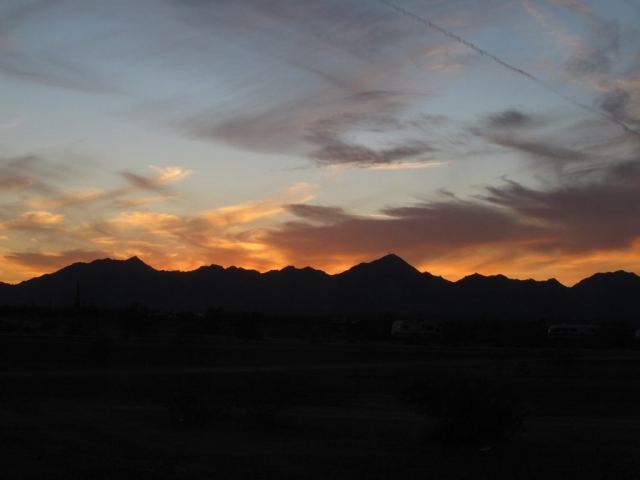 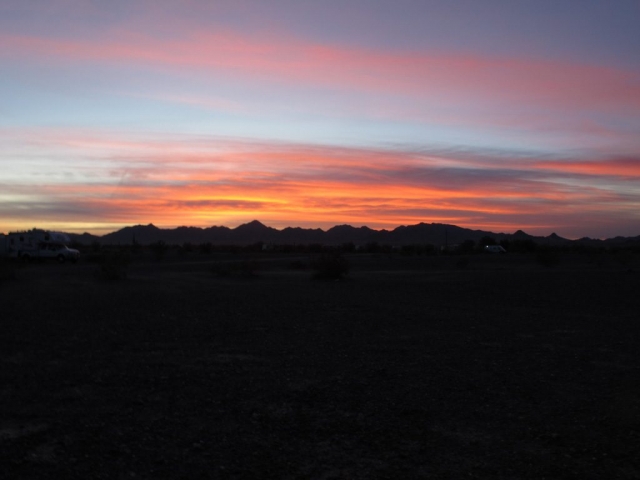 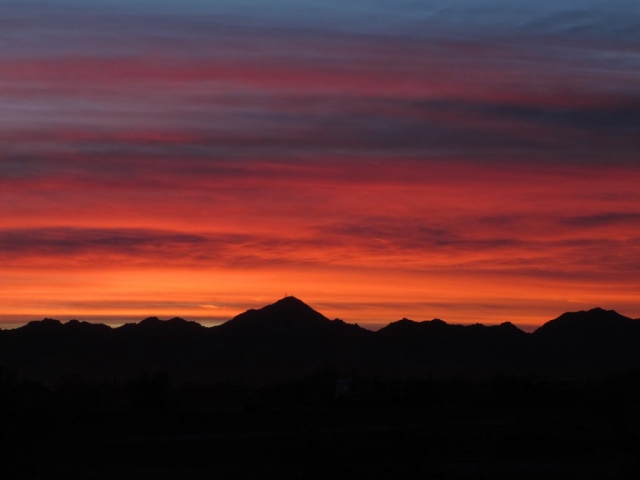 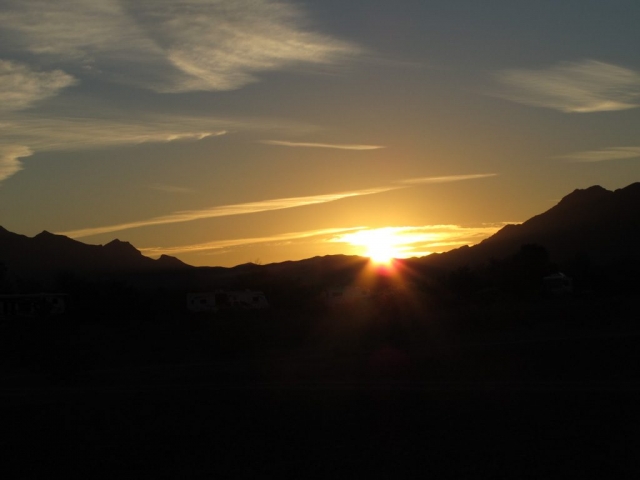 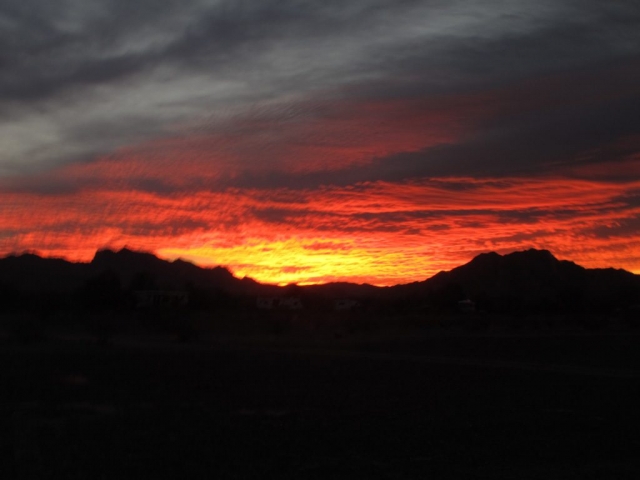 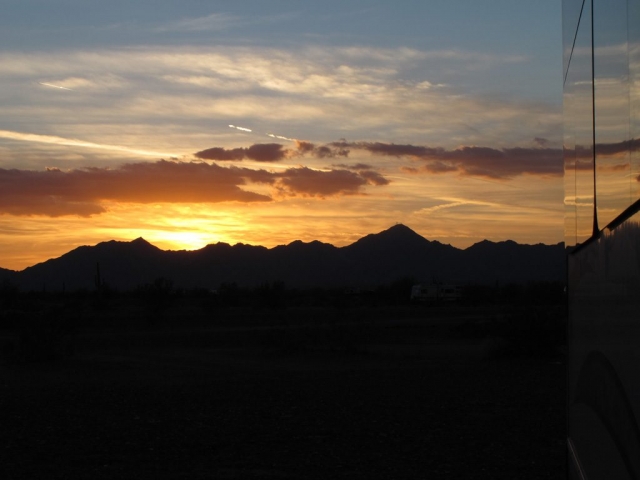 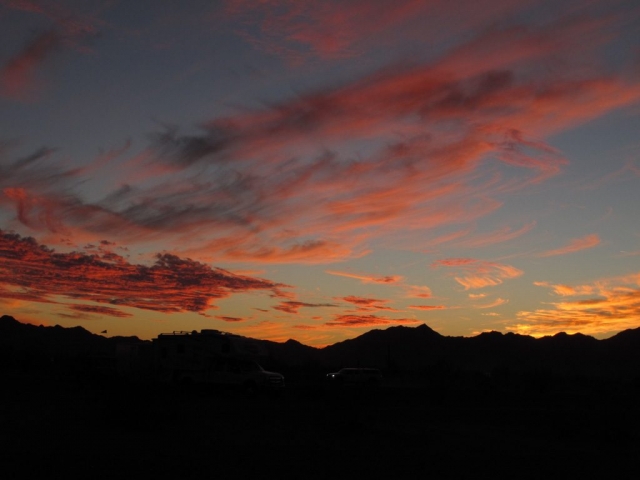 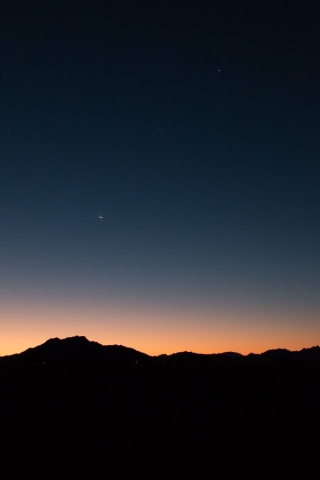 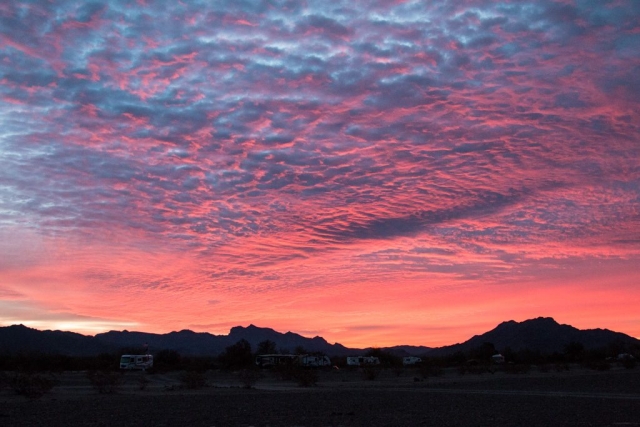 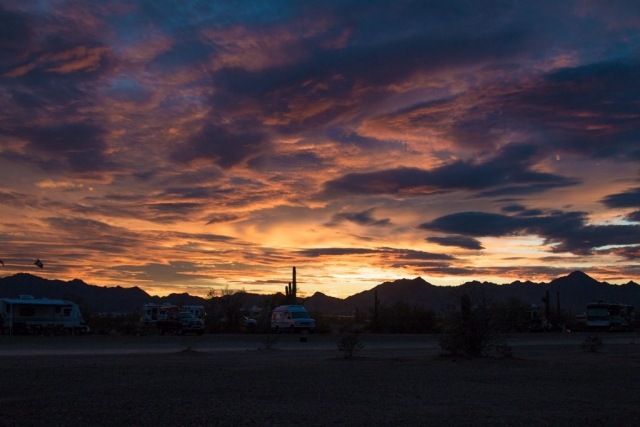 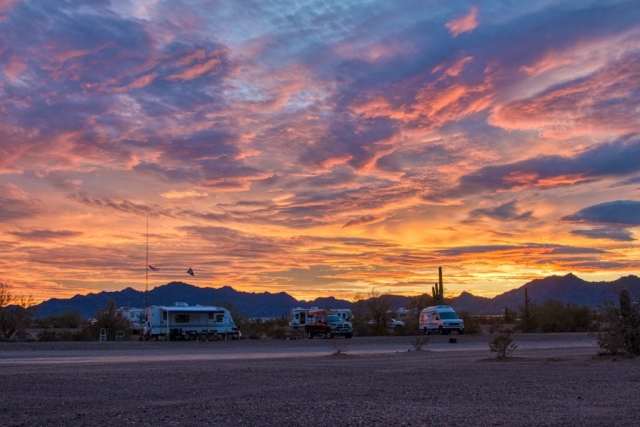 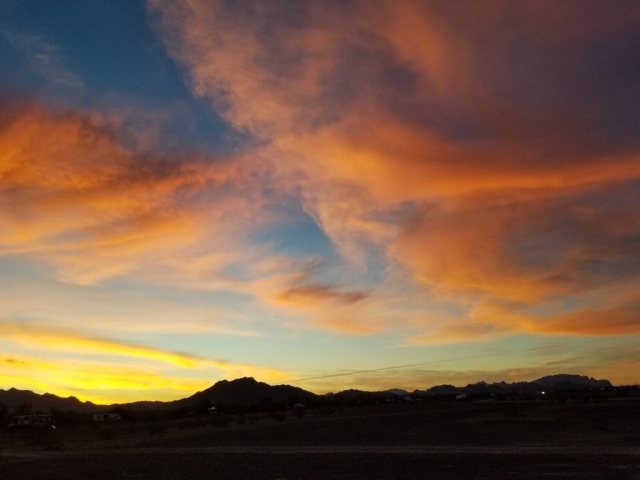 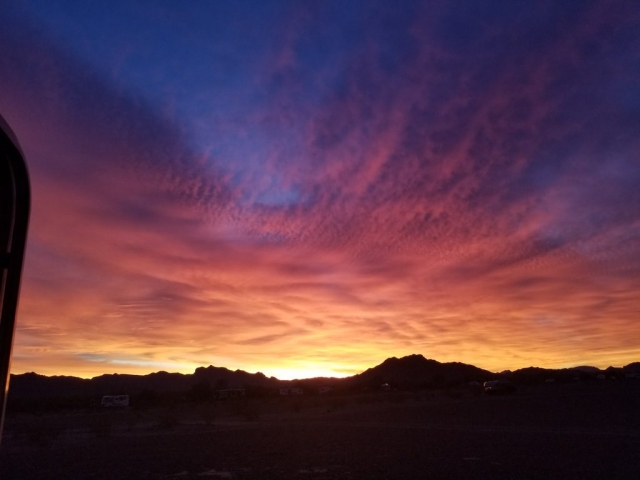 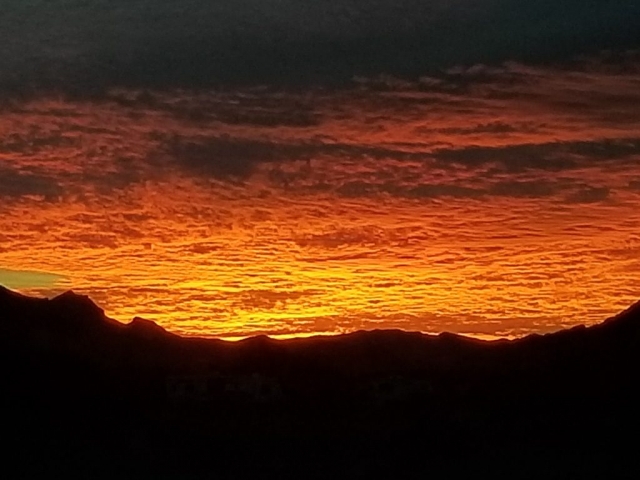 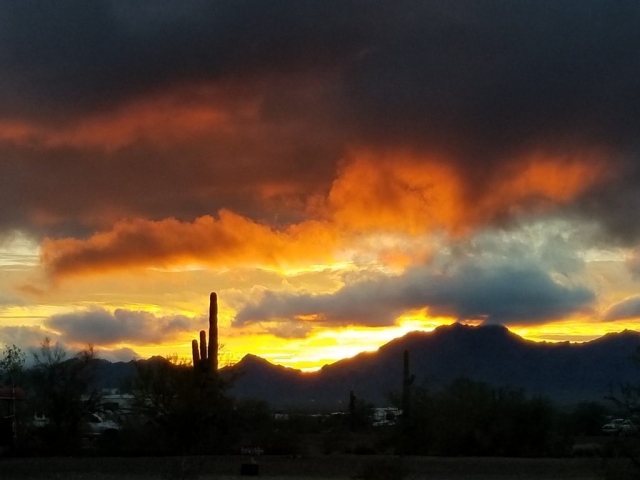 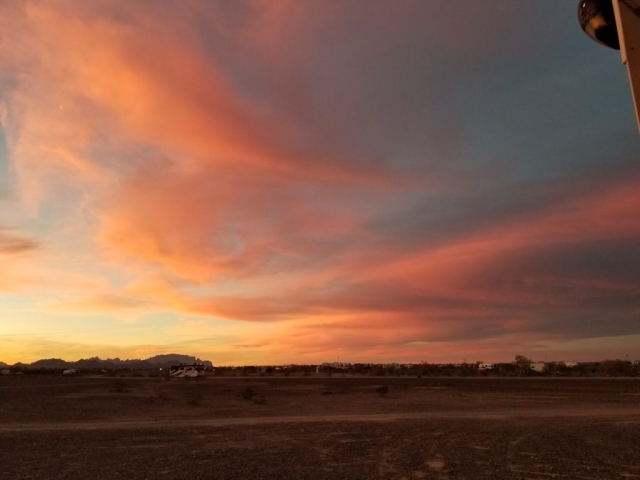 Drum roll please! When we set out on our adventure, we told ourselves that we would try RV “full-timing” for a year before deciding whether to sell our house on Mount Desert Island.

Well, it hasn’t been a year, but we’ve made the decision! We want to continue this adventure for the foreseeable future, so we will be putting the house on the market this summer. We’ll fly back to MDI to take care of all that has to be done to get a house ready for new occupants.

That’s about it for now. Life has been fairly quiet so we haven’t been posting frequently. Rest assured that as we start to travel again we’ll be keeping you up to date with the activities of your favorite lobsters!