Once we decided (months ago now) to give up our ‘sticks and bricks’ home in Maine and continue our nomadic life as full-time RVers, we needed to choose a state to ‘hang our hat.’

Well, we’ve done it. We’re South Dakotans. In March, we registered our truck and trailer in South Dakota; the registration fees there are much lower than in Maine. All that South Dakota requires for registration is a South Dakota mailing address, and since it is quite possible that the trailer and truck will never be in Maine again, there was no point in leaving them registered there. We were able to do the registrations entirely through the mail, which resulted in the following conversation being held several times with campground “neighbors.”

“Where are you from in South Dakota?”

“Never been there!” (OK, Not quite true… but it is a good line. We had been there for a week eleven years ago, on Pine Ridge Reservation.)

But now we have. In order to establish our domicile in South Dakota, we have now obtained our SD drivers’ licenses, and registered to vote.

South Dakota has laws that are written specifically to attract full-time RVers, as do Florida and Texas. To gain resident status—to be able to get a driver’s license and register to vote—you merely have to have proof of spending one night in the state every five years. The reason we chose to cease having Maine as our domicile is because SD has no state income tax, and as noted above, much lower vehicle registration costs. Now we just have to make sure that we don’t stay in any one state for six months or more in any year, or that state could claim us.

“Honey, why did we plan so much time in South Dakota? There isn’t much to do here…”

Everyone has seen Mount Rushmore, if not in person, then in pictures. So is there anything new to say about it?

It is BIG. Pictures can’t capture the scope of the sculpture. No, not even the ones that we’re including here. The entryway into the park is aligned closely to the direction of Washington’s gaze. But I didn’t realize until we wandered a bit that there are other viewing sites that let you look directly at the other presidents as well. We didn’t find the one to look directly at Lincoln, but we did for Jefferson and Teddy Roosevelt.

There is a “sculptor’s studio,” where they have maintained one of Gutzon Borglum’s scaled down sculptures created in preparation for the real one on the mountain. This study is at a scale of one inch to one foot. The studio allowed us our favorite picture of this visit.

Side note: In the early 20th century, Borglum maintained a home and studio in north Stamford, CT, not far from where Kathe grew up!

As we continued to explore the Black Hills of South Dakota, we knew we wanted to stop here. The amazing thing about the Crazy Horse memorial is that it is a work in progress—indeed, it was 1948 when artist Korczak Ziolkowski began to carve this incredibly huge work. The sculpture depicts the Oglala Lakota warrior, Chief Crazy Horse astride his horse and pointing into the distance.

It is HUGE! Larger than Mount Rushmore, the carving, when finished, will be 563 feet tall and 641 feet long. Look carefully.

You can actually spot some heavy equipment up at the top (on top of the arm)–we can’t imagine doing that kind of work, can you?

Ziolkowski’s wife and and seven of their children continue to direct the project since his death in the early 80’s. Technology has changed a bit; the use of laser measuring tools and explosives is now in place.

What is particularly impressive about this project is that a lot more is happening at the site than just the sculpture — a new on-site university, an incredible museum, speakers, special programs, and conferences. Everything is supported by private donation and run by a non-profit group. In fact, the US federal government offered to donate 10 million dollars and it was declined. There was concern that the federal government would take over control of (and change) the project.

Al first learned about this park from a friend on the MDI Search and Rescue team who used to be a ranger there. Wind Cave was designated as a NP in 1903 and was actually the first cave anywhere in the world to be so protected. It is the sixth largest and most dense cave system in the world. To date, 149 miles of passageways have been explored and surveyed—all within ONE square mile. However, they only represent 5% of the total cave system. YIKES!

There are three major levels. We took a tour in middle level.

Frostwork, popcorn (which reminded us of our ceilings in our old home in NH), and boxwork are the three formations found here. In fact, Wind Cave is thought to be the home for 95% of the world’s boxwork.

To form boxwork, the limestone from which the cave is carved fractures twice. The first fractures are filled with water bearing the mineral calcite, which forms a latticework of stone much more erosion resistant than limestone. Later (much later), the limestone is fractured again, this time admitting flowing water. Over millions of years, limestone is eroded away to create the cave, but the stronger calcite remains to create the striking boxwork.

Wind Cave is a sacred place for the Lakota People. Their emergence story originates here; they believe the cave is where they left the subterranean world to live on the surface. The NPS has a writeup on their website.

The only known natural entrance to the cave is a small opening (maybe a five year old could squeeze through). The ranger explained that when there is a difference in barometric pressure inside and outside the cave, a wind will blow; sometimes the air is rushing into the cave, sometimes out. She demonstrated with a ribbon.

We also call it beautiful! The rawness of nature here is inspiring.

Even in this hostile environment, mother nature surprises us.

We chose to take a trail that was partly on the floor, and partly on a ridge. There was a log and wire ladder to get to the ridge that took some doing—mental and physical.

Unfortunately, we think that this ladder is what injured Kathe’s shoulder, requiring her to be seen by a doc, and wear a sling for about a week.

We also saw some careless parenting up on the ridge.

We are about 50 feet off the floor. The wall below the path is sheer. The boy in the white shirt is off the path, standing on a sloping surface covered with loose material. A few seconds after this picture was taken he fell; fortunately he only only slid part way toward the edge. It was absolutely terrifying to watch; we felt completely helpless. A disaster was very narrowly averted. I was getting ready to rush back down to the floor to see whether there would be anything I could do for him.

A few miles northwest from where most of the pictures above were taken, the terrain is quite different, with smoother features and a fascinating coloring.

There was so much to see in the Badlands. As always, click on any Badlands picture in the gallery below to see them all as a slideshow. 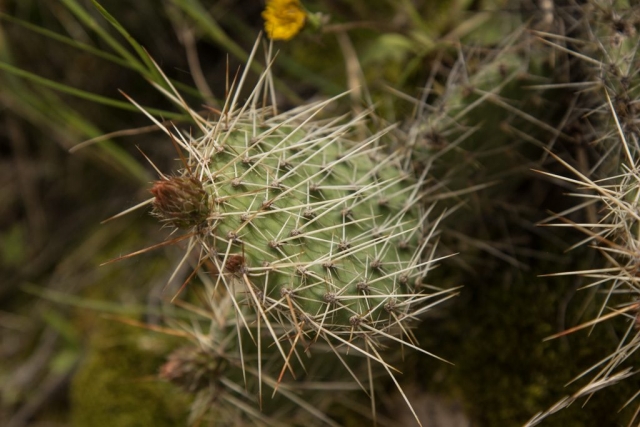 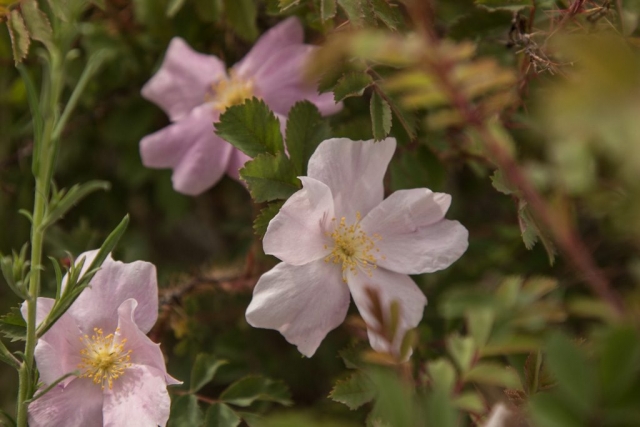 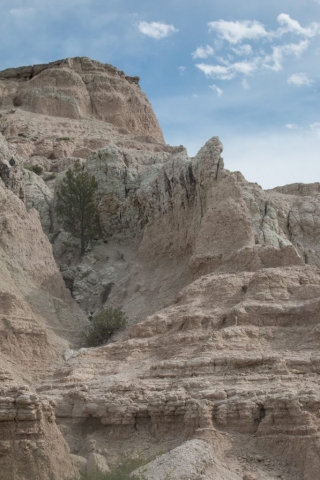 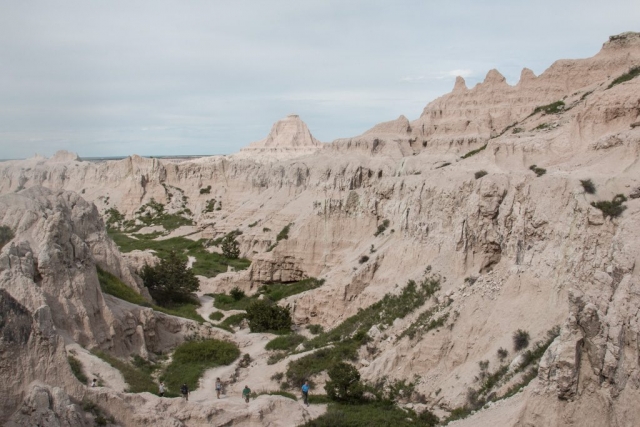 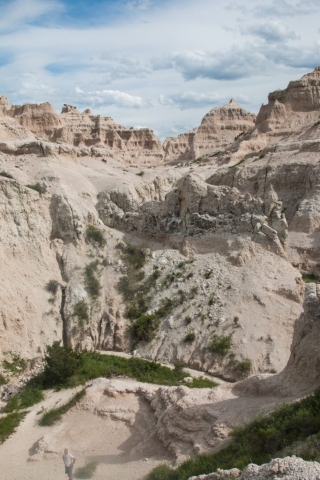 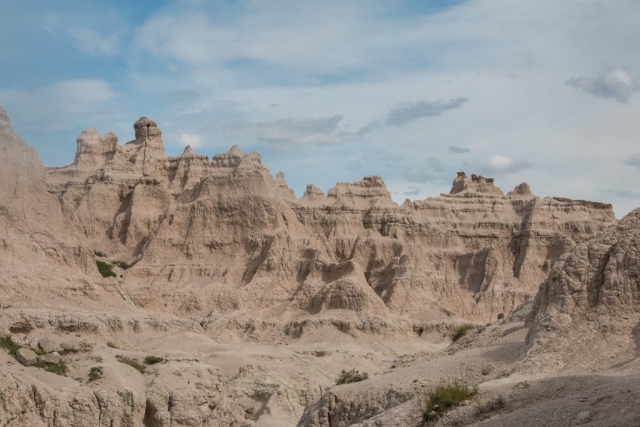 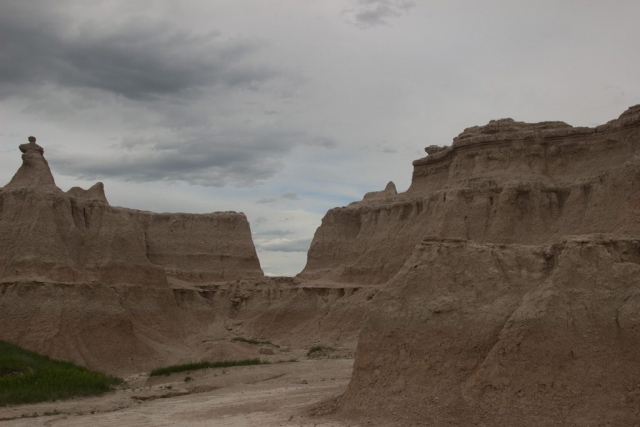 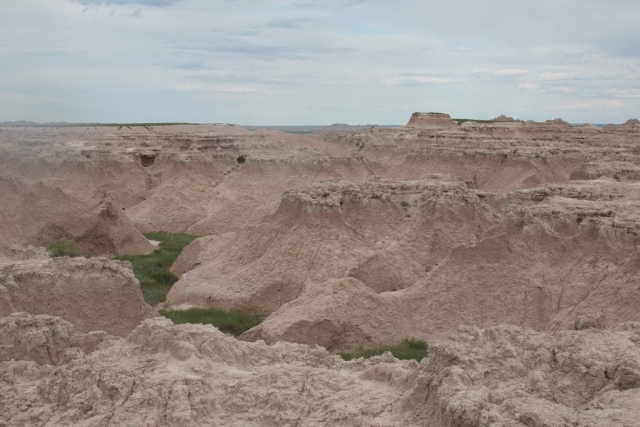 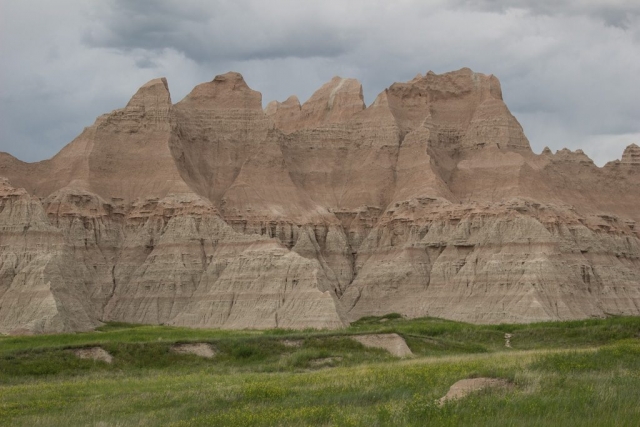 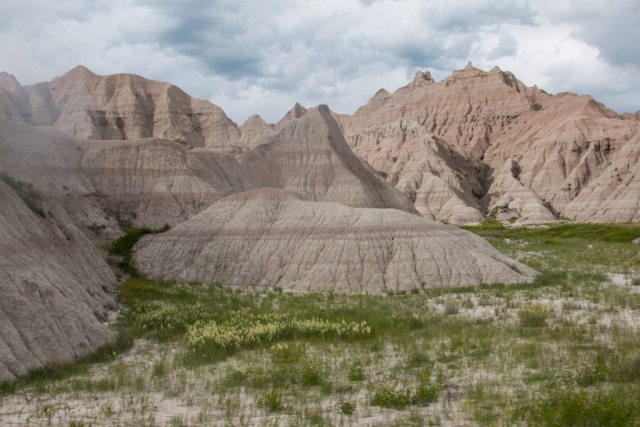 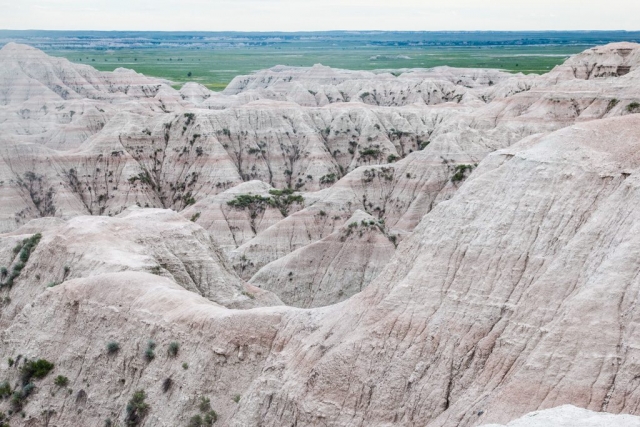 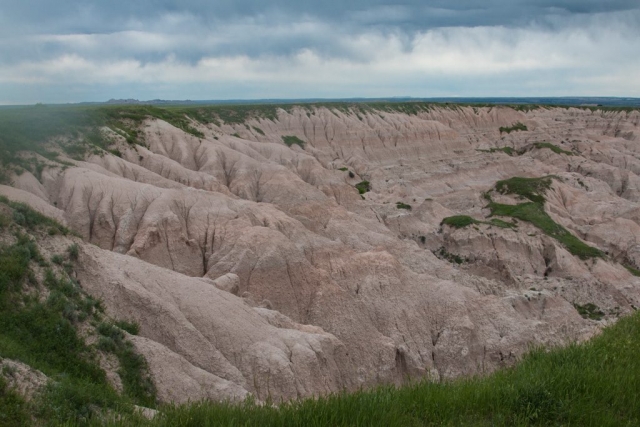 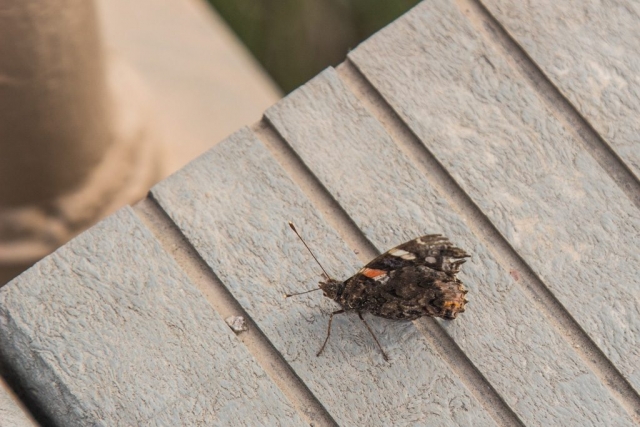 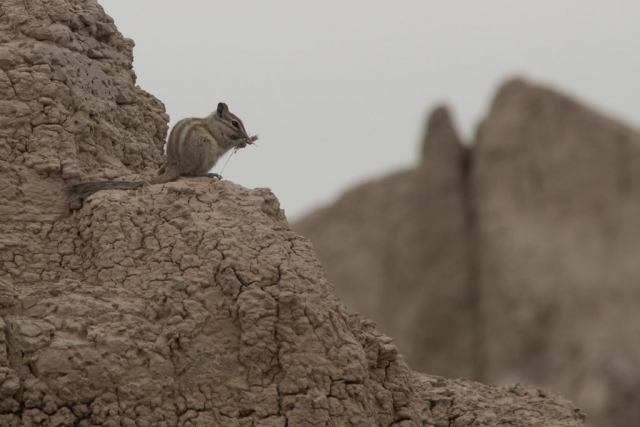 As we noted above, pictures cannot truly represent what we’re seeing. We wish you could be with us to share the real experience, but for now these pics will have to do. We really enjoyed taking this first exploration of our new state. We’ll be back!