We’re writing this on Sunday; we’ve now completed one week of our adventure! Time flies, and so do the miles…  We’ve now covered 1195 miles since leaving our house. (Kathe corrected me (Al) when I referred to it as “home.”  We have our home with us.)

We cheated a little bit to get going…

Our plan was to leave early on Sunday, August 19 and go to Wakeda campground in Hampton Falls, New Hampshire.  We’d get up really (really) early, and do the last steps to shut down the house: draining and winterizing all the pipes in the house.

We decided instead to do that Saturday and then find a hotel room in the Bangor area, leaving from there on Sunday morning.  Good thing, too.  The “draining the pipes” ceremony took much longer than we thought it would have. We would have been quite frazzled had we tried to do it all Sunday.

The trip to NH Sunday was therefore uneventful.

Wakeda is a nice, large private campground, with over 400 sites–but you’d never know it.  We didn’t feel cramped at all. The road from  the office at the entrance to the actual camping areas is almost a mile (you pass a grass landing strip on the property!).

Many of the sites appeared to be (multi-) seasonal with porches or other structures built on (some had sheds!). However, it seemed that the temporary campers (like us) were separated from the seasonals.

We enjoyed biking around the campground roads, but didn’t venture out into the surrounding area.

We planned to meet friends we hadn’t seen in several years in Hampton Beach on Monday, so we used Sunday to do some more figuring out just how we should make use of the limited space in the camper.  We will probably have several more rearrangements before we’re through!  We did go in to Hampton Beach for dinner on a second floor patio overlooking the beach and all the motorcycles and cars “cruising” on the main road.

The visit with friends went very well, with lots of catching up with lunch across from the beach, and a very nice dinner at “CR’s The Restaurant” in Hampton. Nice atmosphere, very good food!

While we were at Wakeda, we noticed a slight smell of propane, so we know that we have a leak somewhere that I have to find.

For right now, we’re using the propane very sparingly.  On. Cook the pancakes. Off.  On. Cook the tapioca pudding (my favorite).  Off.  You get the idea.  Our refrigerator can run on 120 V AC power (home wall plug power) or on propane, so that the fridge can stay cold while we’re traveling.  Since we don’t want to leave the propane on for extended periods we’re not making use of that feature; we let the fridge warm up while we travel. Fortunately, we have a 12V cooler in the back seat into which we put the most perishable items.

I don’t know whether we will find this true of most KOAs or not, but this one provided more than kampsites.  There was cable TV, a large pool, miscellaneous sporting equipment, and little pedal cars (for kids and adults) that could be used for free.  However, we didn’t take advantage of any of that equipment.  There was also a wine store on site.  No, it couldn’t be used for free!  Fortunately, there was also a propane fill station.  Did I mention that we noticed we had a propane leak?

We were greeted by a crane (not sure which type) as we drove into the campground.

The sites, while close together, were wooded so there was a sense of separation and some privacy that we wouldn’t have had were we on just an open field.

It is interesting that they call themselves “New York City North.”  Yeah.  WAY north. About 62 crow miles, or 75 car miles north.  They do offer transportation into the city.

Neither of us had been to West Point since childhood.  Google maps said we were about 26 miles away, so visiting was a no-brainer. If you haven’t gone, or haven’t gone recently, it is well worth a visit.  There is a very nice display in the Visitor Center and there is also the West Point Museum, considered to be the oldest and largest collection of miltaria in the Western Hemisphere.  Due to time constraints we were not able to visit the museum, but we did take a bus / walking tour through the grounds, where we learned some of the high points of the Academy and garrison. There are one-hour tours every hour through the day, and two-hour tours twice a day.  We just missed the two-hour and didn’t want to wait until the second one, so we took the one-hour version.

Here are some pictures, but the limitations of the tour (MUST stay with the tour guide–“or you will have a very bad day,”) and the scale of the Academy grounds mean that these do not do any justice to the site.

The original garrison was located here at the direction of George Washington because it was a choke point on the Hudson River, and could prevent the British from going all the way up the river and isolating the “troublesome” colonies in what is now New England from the rest of the country.  An iron chain was placed across the river (and removed each winter); 13 original links remain.

One of the bus stops was the Cadet Chapel, a non-denominational Protestant church. The stained glass rivals some of the churches we have seen in Europe, and the organ is amazing, with more than 23,000 pipes.  We’d love to hear a concert here! 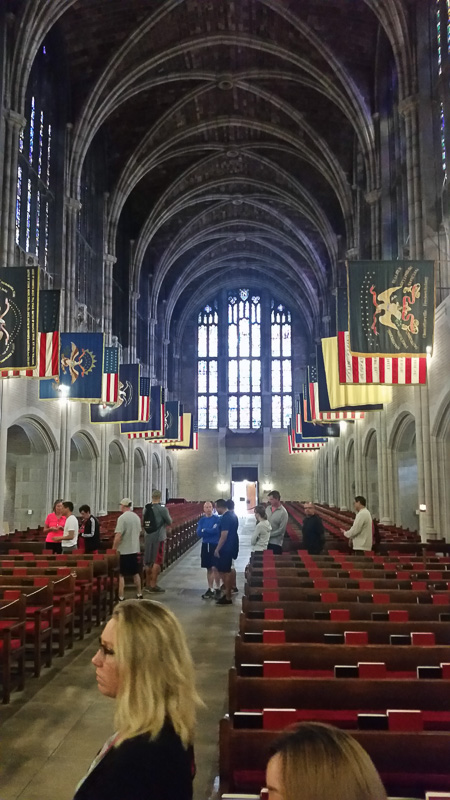 After the tour we had lunch across the street.  “Lunch” is an understatement.  It was also dinner, and lunch the next day!

We had a very enjoyable visit with our niece, Susan, that evening.

Friends and relatives have been telling us about the great camping opportunities at state parks.  This was our first experience, and it was a good one!  Gifford Pinchot is jointly managed by the State and the National Park Service.

The biking trails were fabulous and we jaunted out several times. It was lovely to ride along the lakefront and see so many people out fishing (boats were available). Yes, we both have a fair way to go to get as fit as we’d like but we figure if we ‘give it a go’ on a daily basis (biking, walking, or hiking), we’ll get there eventually. Right?

Eager to fly our drone (“Butterfly” — see what we did there? GWTW?), we needed to do some research about whether this was a restricted area. (We know that you cannot ever fly a drone in a National Park or anywhere near an airport or landing strip.) Turns out that there are only six parks in the whole PA State Park system that allow drones; GP is not one of them. Oh, well . . .

It was at Gifford Pinchot, however, where Al befriended a next-door (next site?) camper who was eager to talk shop about all things RV-ish. Tom and Al ended up exchanging tips and lessons learned while Sue and I shared some organizational, interior ideas. Before long, the guys were under Tom’s camper checking the torque on U-bolts. Apparently, it was a good thing they did! It was fun to meet another couple who has also just started their full-time RV lifestyle.

Also momentous at this stop, we used our washing machine for the first time. It worked great! It was somewhat of a challenge to find the powdered high-efficiency detergent that is required; we are now the proud owner of a gallon Zip-lock bag of detergent that will last us for 100+ loads (it only takes 2 T per load).

It was a wonderful first week — we were surprised at how much room the campgrounds had — we’d been told that campsites are very hard to come by. It was great to have a reserved campsite at each location, but we probably could have gotten one on the spot anyway.

We’re off to Indiana today for an 8 day stay at a county fairgrounds. More about that later!

13 thoughts on “Our first week”