When we first started building our itinerary and knew we’d want to be in Delaware early in October, I thought it would be fun to get back to Assateague Island — and maybe my brother, Richard and sister-in-law, Carol could join us! They made hotel reservations as soon as we told them our plans. They come to Chincoteague Island annually and were just looking for a good excuse to come back this fall. We’re SO glad they did!

Chincoteague National Wildlife Refuge is on Assateague Island, abutting Assateague Island National Seashore. One of the  primary draws to come here was the two herds of Assateague ponies, one in Maryland and one in Virginia. We remembered coming here about 30 years ago when our kids were young. Of course, neither of us remembered too many details. It was great to return.

The refuge has much to offer in addition to the ponies, with many varieties of birds, sika deer–actually a small type of elk, not a deer–rabbits, and many other species.

We stayed at a campground a very short distance from the refuge on Chincoteague Island (VA) so we could bike in.  We can see the Assateague light from our “living room” (and kitchen, and dining room, since they’re all the same).

The southern pony herd in Virginia is the larger of the two, at about 150 ponies.  They are owned by the Chincoteague Volunteer Fire Department.  The department has a special use agreement with the  Wildlife Refuge to use a large fenced-off marshy area where the horses are kept.  This area is so large that even with a 540mm lens, the horses at the far side are not able to be reasonably photographed.  These horses are less than 1/2 way across the marsh.

Sometimes they do indeed come closer.  The road into the refuge goes along one side of the marsh where I got the pictures below, and there is a mosquito-infested trail that goes along another.  We didn’t last long on that one.

Whether they’re in the Chincoteague or Assateague herds, the breed is Chincoteague Pony.  The reference I saw said “All colors.”

And sometimes they get even closer.  Notice the brown and white mare and the smaller pony just to the right in the picture below. They are the same as in the picture above, but somehow they got out of the enclosed marsh area! 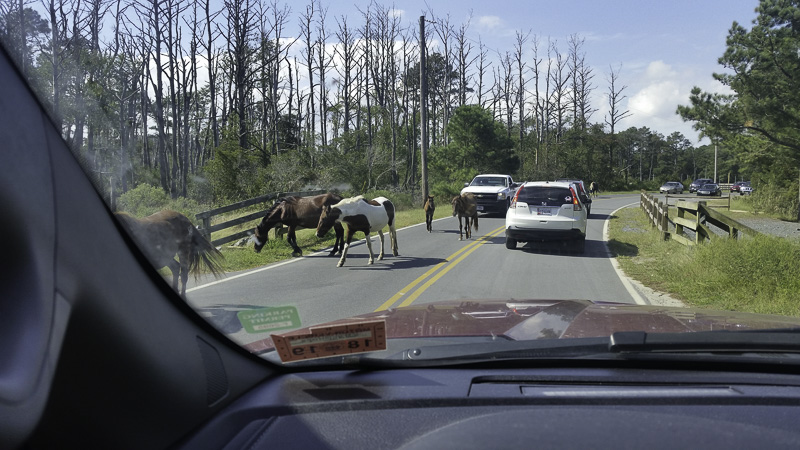 When out early one morning getting some of these pony pictures, I saw a wonderful sunrise across the street from the marsh area.

We hadn’t made too many plans ahead of time with Richard and Carol but knew we’d be sharing many restaurant meals together, and boy, DID we! Our first day together, I offered to drive us all to the northern end of the island so we could visit both the Assateague State Park (run by MD) and the Assateague National Seashore. (Don’t worry — it took us all week to be able to get it all straight!).

We piled into Scarlett (our F350) and headed out. It only took a bit over an hour to get there and with all the conversation in the car, it seemed like a very short ride. The Visitor’s Center for the national park is quite large and just before the bridge that heads onto the actual island. And of course, there were ponies on the side of the road as we approached the bridge —- Move on! Move on! No stopping! scolded a park employee. We ducked  briefly into the state park and then onto the adjoining road into the national park.

The speed limit is only 25 MPH so it allows you to peer into the woods and toward the beach looking for ponies. We found a beautiful long (!) boardwalk that lead out over a brackish marsh in one direction and out to the bay on the other. It was so peaceful.

We spotted quite a few RV’s parked (camping) in the parking lots adjacent to the beach. It piqued our curiosity and it looks like we’ve put camping at either the state park or the national seashore in the future.

Richard and Carol suggested we share dinner at one of their favorite restaurants followed by amazing ice cream! Who can say no to fresh crab cakes and an ice cream sundae? And so, over the next few days, we shared dinner at a different restaurant each evening. Wow! 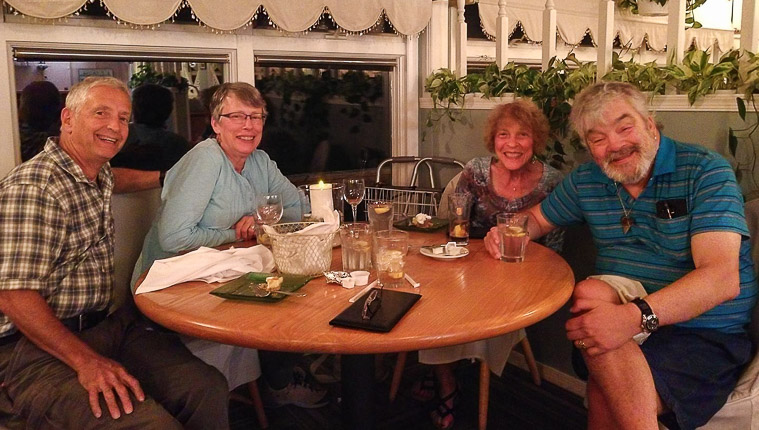 The next day, Al and I returned to the northern side of the island but brought our bikes. The part of the park that you can access by car and bike isn’t all that long (maybe 3 or 4 miles) and beyond that, it’s all OSV (over-sand vehicles) —- a permit is required, and alas, Scarlett weighs too much. The biking was perfect and we had our PB&J sandwiches at the beach. A mare and foal were there along with many surfers!

The ponies in the northern herd in Maryland are owned by the US Government, and are free to roam wherever they want to in the Maryland section of the island; there is a fence at the state line to keep the two herds separate.  This herd is smaller, estimated at 70-80 ponies.  They can be hard to find, but there are “leavings” everywhere!

There are “Pony Patrols,” volunteers who are charged with keeping visitors at least 40′ away from the ponies when they roam into heavy tourist areas like the beach.  But a long lens can bridge that 40′ gap pretty easily!  Since these are wild animals, I didn’t want to be any nearer—but I guess there are a lot of people who aren’t as smart.

We saw this mother and colt pair next to a restroom at the beach of the National Seashore.

The colt seemed to be bothered by the bugs in the area (mosquitoes and biting flies), and was squirming on the sand.

Birds on the island

This island is on a major migration flyway for many species of birds.  Later in the fall, apparently the ground looks like it has snowed when several tens of thousands of snow geese congregate on the island!

Here are some of the birds we saw on the island.  Egrets of several subtypes are everywhere!

We saw several other species too.

And of course, we have the ever-present seagulls and Canada Geese.

We spent a couple of days at the beach with Richard and Carol on the Chincoteague Island side. It was lovely! So much long-overdue visiting while being serenaded by the surf and warmed by the sun.
Having never vacationed with any of our siblings as adults, we were so happy to get so much time with Richard and Carol. We had a blast and we’re already making plans for the next time!

Other animals in the Refuge and at the Seashore

Lo and behold, there are animals other than ponies and birds here! Some are very well hidden like this crab. 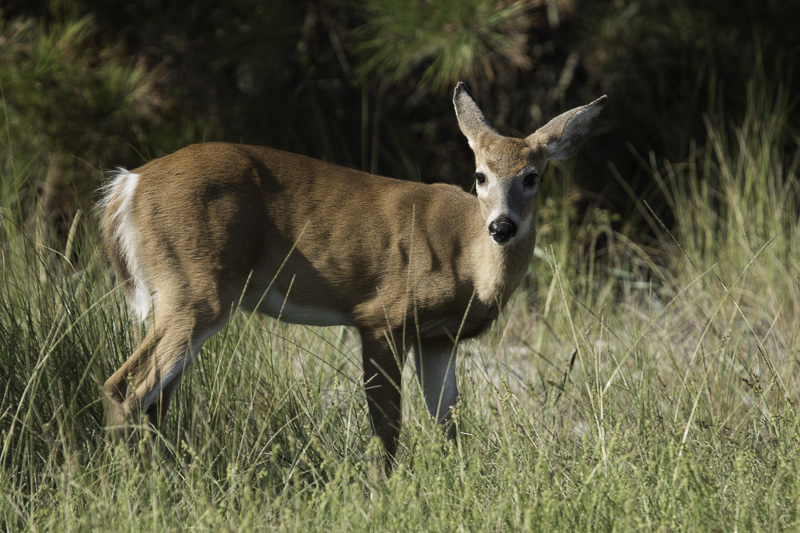 Camping, the beach, wildlife, photography, and family — what a winning combination! We look forward to returning to Assateague and hope that Richard and Carol can join us the next time.