We are planning to spend a good portion of the winter in the desert southwest.  Three main requirements for “boondocking,” also called “dry camping,” are having:

While many people carry portable (or installed) generators (as do we), using generators on a continuous basis isn’t very tenable.  So we’ve added solar power capabilities.

This is an unusual post for us, in that it is fairly technical (also called “geeky”): nuts and bolts (and wires).

We wanted to be able to use all the devices we normally do, some of which use 12 volts DC (battery power): the lights, radio, water pump, ceiling fans, etc., while others use 120 volts AC (household power): the TV, Instant Pot, microwave/convection oven, etc.  We also knew that we wouldn’t be able to use our air conditioners, at least for any extended period.  They simply draw too much power.

The basics of a solar system for an RV are:

First, some pretty (or pretty geeky) pictures.  Then for those who are interested, the details.

Our solar panels are mounted on the roof.  They can be flat for travel and we will leave them flat when we’re somewhere that we will only be staying briefly, or where we can’t orient the trailer to be on an east-west axis so that tilted panels can face south.

When we will be somewhere for a while and can orient the trailer properly, we can tilt the panels to more directly face the sun.

The solar panels can generate a range of voltages.  We need controllers to change the incoming voltage into the proper voltage to charge the batteries.

Our inverter changes the 12 volts DC into 120 volts AC.

Now the details… only two more detail pictures below.  Feel free to stop reading if you don’t want to dive into those details.

Solar panels are measured in terms of the number of watts they can generate under “standard” (ideal) conditions.  We chose to use eight panels, each of which can nominally generate 180 watts.

Watts measures the amount of electrical power in use right now; it is analogous to speed.  Think “60 miles an hour.” If you want to know how far you’ve traveled, you need to know how long you have been traveling at 60 miles an hour. The electrical equivalent to distance is watt hours.  If you turn on a 60 watt light bulb, you are using electricity at the rate of 60 watts.  If you leave the bulb on for an hour, you have used 60 watt hours of power. The electric meter on your house measures the number of watt hours your activities consumed.

With our eight 180-watt panels, we theoretically have the ability to generate 1440 watts of power from the sun, under “standard conditions,” which are not often equaled in real use.  The amount of watt hours we can generate will depend on how many hours of sunlight we have (and whether it is cloudy or sunny, winter or summer, etc., etc.)

We’ll get back to watt hours below when we talk about our batteries.

Two of the primary characteristics of batteries are the chemistry used, e.g., lead-acid, alkaline, or lithium-ion, and their capacity—the amount of energy they can store.

Until recently the standard battery chemistry for use in RVs was lead-acid, the same as in your car’s battery if you don’t have an electric car.  They are still very popular, primarily because of initial cost, but they have several disadvantages when compared to a newer chemistry, lithium iron phosphate which is abbreviated LiFePo4—say that 3 times fast!  In the comparison  LiFePo4 batteries:

The LiFePo4 batteries  have some downsides as well.  They can’t be charged below freezing, and they are very expensive.

For us, the advantages outweighed the disadvantages, so we bit the bullet and got six 100 amp hour LiFePo4 batteries.  Ouch!

Finally, although both battery chemistries have “lithium” in their name, the LiFePo4 batteries are not the same as the Lithium Ion (Li-ion) batteries that are in your cell phone and in my Chevy Volt. Our batteries are slightly less energy-dense than Li-ion, but our chemistry is intrinsically fire-safe.

Batteries are measured in terms of amp hours of energy that can be stored.  There is probably a reason the industry doesn’t use watt hours, but I don’t know what it is.

Amperage is the measurement of how much electricity is moving through a wire. It is similar to the amount of water coming out of a hose.  Like watts, it has a corresponding measurement for use across time, which is amp hours. In our water hose analogy, this would correspond to gallons of water.

Fortunately, amps and watts are related by a third factor, voltage. Voltage is like the pressure inside the water hose. Watts is amps times voltage.  If our battery is a 12 volt battery, then a one amp flow delivers 12 watts of power.  I hope I didn’t lose you there.   Our 600 amp hours of 12 volt batteries stores nominally 7200 watt hours of power. (I’m ignoring complications like “12” volt batteries are actually 13.2 – 14.4 volts.)

This picture shows the panels generating 42.7 amps of power at a voltage that is too high to apply to the batteries.  The controllers change it to a lower voltage at higher amps–retaining almost the same number of watts (there is a slight loss caused by the controller’s operation).

And here is the current battery state.  Fewer amps going into the batteries because the RV is consuming some. 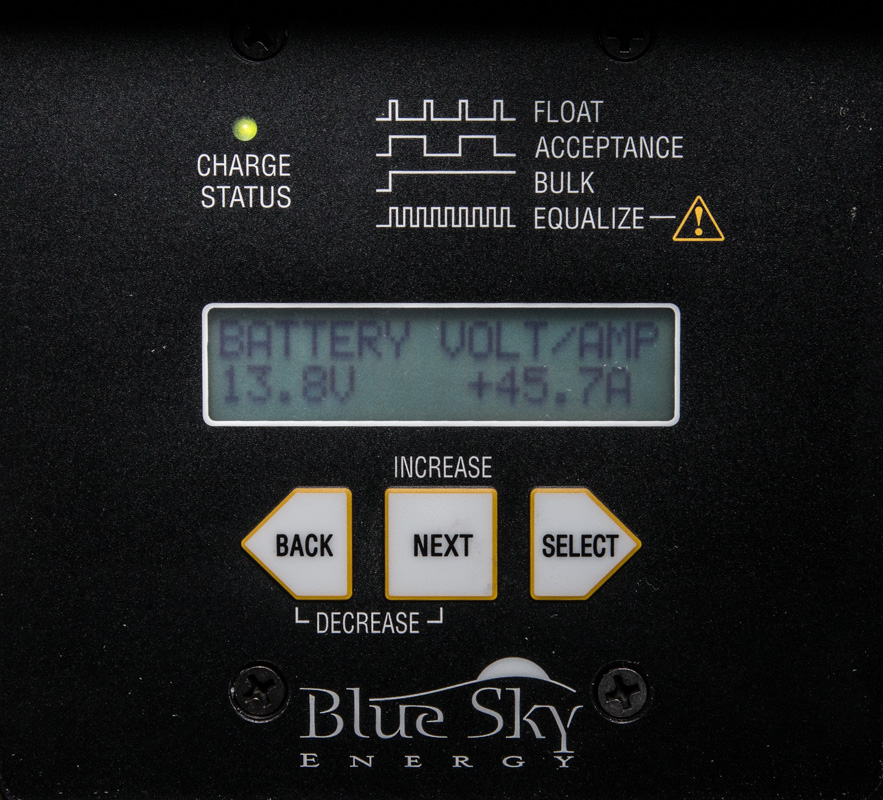 “ our mileage may vary.”

The last major component in our system is a 3000 watt inverter. This can supply about 25 amps of 120 volts AC power.  However, to do that it has to consume over 250 amps of 12 volts DC from our batteries (inverters are not 100% efficient).  Remember that we have only about 480 amp hours of usable storage (80% of 600 amp hours).  So obviously we wouldn’t be using that much power for very long!

The inverter is sized large enough that we can run one air conditioner from it for a while, especially in the peak of daylight where we can pull power from both the solar panels and the batteries.  But if we need to run it continuously, we’ll have to spin up one of the generators!

So that is the package that we are counting on to keep us going in the desert this winter.  We’ll see how it goes… After all, this trip is an adventure!

6 thoughts on “Hacking the Sun”