I remember a small cave in the woods out behind my Nanny and Pop-pop’s house when I was a little girl. My brother told me about it; I decided to take his word for it.

Two weeks ago, while in the Shenandoah Valley (Virginia), we visited Luray Caverns. Luray is a commercial attraction and not part of Shenandoah National Park. We signed up for a tour and were led down a long, fairly steep staircase to an amazing underground world. I remember seeing stalactites and stalagmites in Howe Caverns in New York State as a youngster. But these…

The young man who toured us thru the caverns seemed to be in training for some kind of footrace; we wanted to take lots of photographs but he kept insisting that we stay together and keep up with him. It was frustrating and we finally decided we’d take our time and take the photos we wanted to—we had paid dearly for the tour and wanted our money’s worth.

The stalactites are formed by water coming down through the roof of the cavern carrying dissolved limestone. The limestone is left behind when the water evaporates.  Stalagmites are formed when those drips of water drop off and hit the ground; as the water evaporates, the stalagmites grow upward. Many experts claim that the stalactites and stalagmites grow as slowly as 10cm every 1000 years. They are precious.

We were fascinated to learn that until the 1920s, tourists were allowed to snap off the end of a stalactite as a souvenir. Once the tip is broken off, the stalactite will cease to grow. It was sad to see so many broken, flat ends as we worked our way through the passages.

The old expression “A picture just doesn’t do it justice!” came to mind when we downloaded our pictures of the reflecting pool. It was pure magic; footsteps ceased and all you could hear was the intake of air as each tourist rounded the passage and gasped as they faced the pool head-on.

On our way to Luray, we passed dozens of billboards (and I mean dozens!) advertising the caverns. Many of them called attention to ‘The Great Stalacpipe Organ’—what could that be?

Sure enough as we were nearing the end of our tour, we came into a huge room within the cave that had an organ console up on a landing. Apparently you can make arrangements to get MARRIED in this room, complete with a pipe organ accompaniment. (It’s a bargain at $1900 for just 12 guests!)

The organ is actually an electrically actuated lithophone that produces tapping of a large number of pipes (stalactites)  throughout 3-1/2 acres of the cave. You can see the wires along the walls, weaving in and out of the limestone appendages. The tour guide pushed a button and we were regaled with the limestone version of “A Mighty Fortress is Our God”—you could almost make out the tune! Because of the enclosed space of the cavern itself, the song can apparently be heard throughout the entire cavern.

One of the most magnificent features in Luray Caverns are the ‘curtains’— they are beautifully translucent stalactite formations that drape down from the ceiling —almost like long sheets of beautiful linen. Glorious!

During our stop in the Shenandoah Valley, we had the solar panels installed which required Al to be at the campsite all day. He encouraged me to go out into Shenandoah National Park by myself.  The first day I went out, I missed a sign and ended up driving across the width of the park into the next town before I realized what I’d done (without my trusty navigator with me). So I turned around (I’m getting really good at those twisty-turny mountainside roads) and found the turn I’d missed.

When I finally got through the gate, I drove up to the first viewpoint. It actually involved a 4 mile loop hike and it was not something I was up for. So I stopped into the ladies’ room—The woman at the sink reminded me of someone from back home. “Wait! I know you!” I exclaimed. It was Dot—I’ve known her for a couple of decades — we attended the same rughooking retreat for many, many years back in Maine. What were the chances? We had a great time catching up for a few minutes. Back to the park . . .

Shenandoah NP boasts its centerpiece Skyline Drive as one of the VERY BEST places to see beautiful fall foliage (don’t worry, Mainers —I don’t believe anything can top autumn in Maine); it runs the entire length of the park. Unfortunately, there was not a smidgen of fall color. There were, however, some beautiful overlooks with views that reminded me of the Great Smokies—I stopped a number of times and made a stop at the Visitor’s Center just as a few spritzes of rain appeared on my windshield.

By the time I got back to the truck, the clouds and fog had really socked in—and it was raining more steadily. Yeah, doing twisty roads—steep and downhill—and not being able to see past a very few feet in front of my bumper was NOT FUN.

I went back to the national park on the second day of the solar install and was able to spot just a few more leaves giving way to a touch of dark yellow. Many leaves appeared just brown and shriveled. Disappointing. We’ll go back another year— and for Al, it will be his first time IN the park.

Imagine a series underground caves and tunnels that layer, twist, and intersect for more than 400 miles! We stopped at the stunning visitors’ center and learned quite a bit about the cave system. O.K., I knew about the bats but not about the cave crickets and cave rats!

We had pre-purchased tour tickets online for the Grand Avenue Tour for the next day so this first day in the park, we decided to venture into the self-guided “Historic Entrance.” It comprises two huge rooms with numerous placards with all kinds of information; you can read your way right through. There were lights — just enough so you could see your way around and read the signage (kind of). There were three rangers on duty. Al’s great about asking questions and learning as much as he can from the rangers. Interestingly, one of the rangers told us that since those placards have gone up, it’s rare for anyone to talk to the rangers anymore. How sad! She explained that they have so much knowledge to share but if no one approaches them . . .

We stopped to speak to another ranger on the way out. I asked about the bats. They’ve lost about 90% of the bat population due to the White Nose Syndrome; it’s a fungus that has killed millions of bats across the U.S. It came from Europe and Howe Caverns was where it was first detected here. The ranger said he’d only spotted two bats today and he pointed his flashlight to a tiny black spot high up on the cavern wall. So small.

The next day’s Grand Avenue Tour comprised four miles of strenuous walking and climbing—-all at 260+ feet underground!
Two rangers accompanied us —one at the front who flipped light switches ahead of us and who taught us so much along the way. The second ranger brought up the rear and switched lights off as we moved on.

It was magnificent—see for yourself! 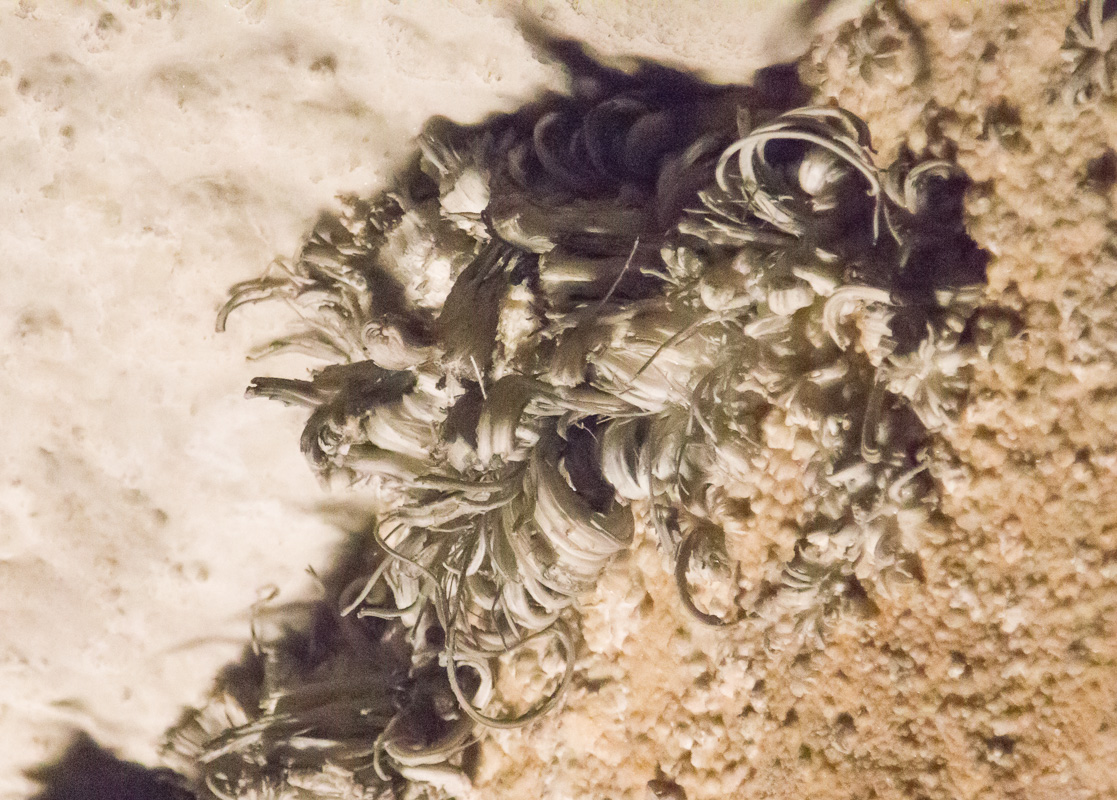 At one point during the tour, the rangers had us sit at on benches along the sides of the path. They wanted us to experience TOTAL DARKNESS and turned off all the lights and just listen. It was amazing.

As we neared the end of our Grand Avenue Tour, I asked the lead ranger what the difference is between a cave and a cavern; having visited both, I was curious. He gave me a very simple answer: “RN!”

As we approached the exit, the ranger stopped us and shined his light on the ceiling so we could see a large group of cave crickets. They hang out there and only leave the cave every 7-14 days to eat. Cute little critters, eh? I told the ranger I was glad to see the crickets and was REALLY glad I HADN’T seen any cave rats. “Don’t look over to your right then,” he told me. “I can’t guarantee they’re aren’t some over there.” Aaaaaand, I made a very quick exit!

Water, water, everywhere! It’s what carved the magnificent cave system. The Green River and its tributaries did most of the work and it still runs several layers below the tunnels that we traveled. 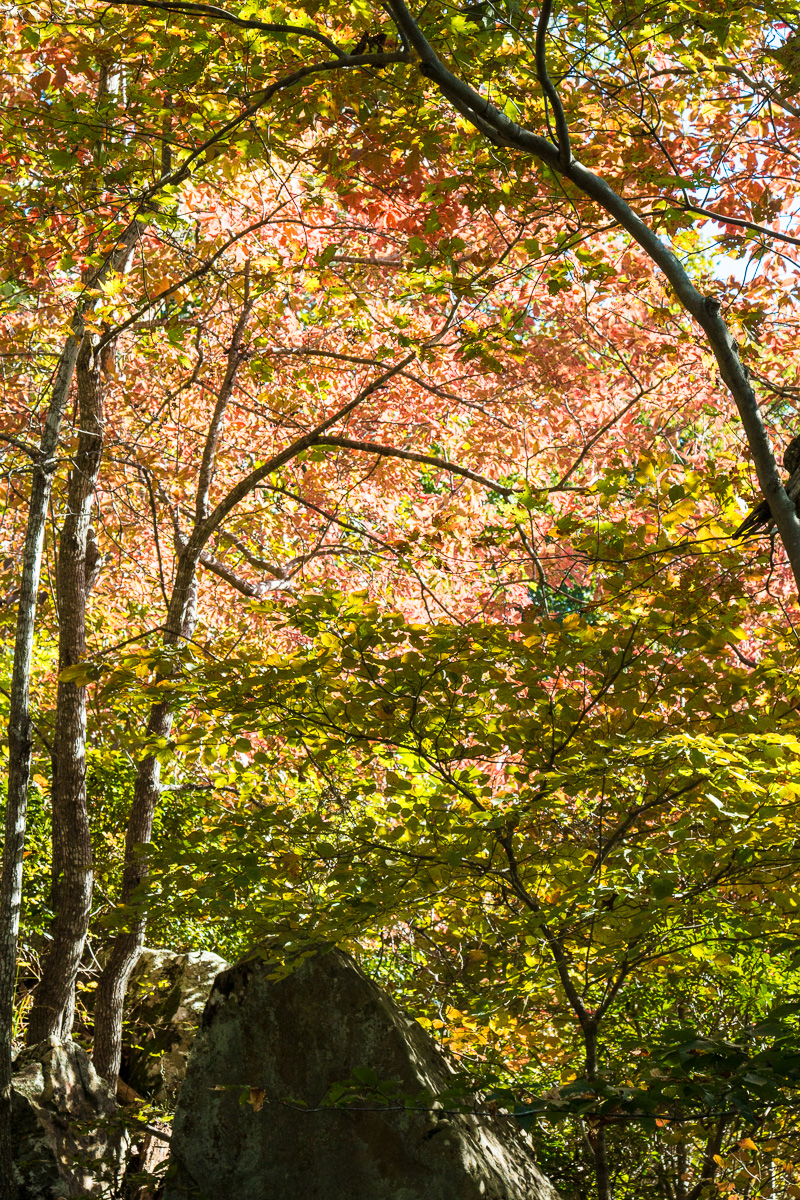 Finally starting to see some color!

The cave systems we visited were magnificent and very different from each other; Luray was commercialized with a very quick, pricey tour while Mammoth Caves had a huge range of tours and with our Senior Park Pass, it was a steal! We’re so glad that we got to experience both of these amazing places. And, yes, we’re still on the prowl for some fall foliage!